StevenEven.com gets down under with a bold collection of mens fashion underwear that ranges from sexy boxer briefs for men to mens bikini underwear in a variety of styles, colors and fits.

Mens fashion underwear - Every man has his own underwear identity. From mens bikini underwear to thongs, jockstraps to mesh boxer briefs for men, StevenEven offers a sleek selection of mens fashion underwear featuring the most popular brands of today including Clever, Steven, Joe Snyder underwear, PP, Pikante, Gia, Candyman and a number of other designer styles.

Briefs for men - Some men gravitate towards boxers while other men are all about the boxer briefs. StevenEven will brief you no matter what your underwear preferences are with a comfortable, form fitting collection of mens underwear briefs available in a striking assortment of styles. You'll find briefs for men in solid colors and patterns, striped briefs, graphic, regular briefs or boxer briefs for the men who want the best of both underwear worlds.

Mens thong underwear - For work or for play, working out or dressing up, every guy deserves designer mens underwear that will suit any occasion. If you hate visible underwear lines but love the right support, you can't go wrong with mens thong underwear and g-strings that are as easy to wear as StevenEven's bestselling bikinis and briefs for men. Find designs that range from sporty to sheer, cheeky to classy, with over 75 thongs styles to choose from.

Whether you're a fan of Joe Snyder underwear or Unico briefs for men, bikini swimsuits or elegant mens underwear briefs, StevenEven brings men who are on top of today's fashion trends a modern selection of mens fashion underwear styles that look good and feel good underneath everything that you wear. 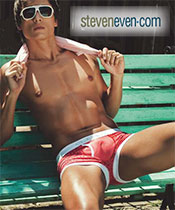