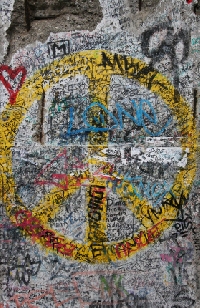 The Cold War was a hostile stand-off between the two powers.

By August 1944 Churchill, Roosevelt and Stalin met in Riga, Latvia to settle what would happen to Europe and Germany after the War. The agreement set the stage for what was to come, the Cold War.

The Soviet Union took over much of Eastern Europe. Great Britain and the U.S. stood by not ready or willing to challenge the Soviet Army. Taking place from 1947 to 1991, the Cold War was a war between the U.S. and its allies and the Soviet Union and the Communists.

One of the first problems in Europe was Berlin. There were three occupying armies in the city. The U.S., England and the Soviet Union had separate occupation zones. In addition, Berlin was surrounded by the Soviets. Access to Berlin was available through roads.

But in 1948 road access to Berlin was removed. The Soviets were intent on claiming all of Berlin. In response, the U.S. and its allies began a massive airlift of food, clothes, medicine and other supplies. After 16 months the Soviets relented and allowed normal road traffic to resume to Berlin.

While tensions were rising in Europe, Mao Tse Tung and his communist army expelled Chaing Kai-Shek, the ruler of China. Chaing moved to Taiwan. This set tensions between the two nations which haven’t been resolved. The communists controlled all of China.

Encouraged by the Chinese communists, Korean communists launched an attack into the southern part of Korea. The American army was able to stop the advance and an armistice was signed in 1953.

The French military forces were defeated in battle by Viet Minh communist forces forcing the French to abandon Vietnam. Eisenhower sent military advisors into Vietnam. Vietnam was broken in two at the 16th parallel. War would consume Vietnam until 1975.

Since 1945 The Soviet Union had a presence in Eastern Europe. In October 1956 Hungary made an attempt at independence. Twelve days later Soviet tanks moved in and crushed the rebellion.

Closer to the U.S., Cuban revolutionary Fidel Castro struck at the Cuban government of Fulgencio Batista. Castro declared his communist affiliations and quickly alienated the U.S. Many Cubans fled the island. In 1961 President Kennedy authorized a military landing at the Bay of Pigs to overthrow the Cuban leader. It failed.

Later, in 1962 the Soviet Union began to build missile launching sites and imported nuclear-tipped missiles. The Cuban Missile Crisis ensued and after several days, arrangements were made to remove the missiles from Cuba.

Back to Berlin. East Berlin was separated from West Berlin by barbed wired fence until it became apparent to East Berlin authorities that many people were crossing over. A large brick and cement wall was constructed that became a symbol of the two different ways of life.

Like Hungary 12 years earlier, another Eastern block country tried to break free from Soviet domination. The Czechs were no more successful either. The Prague Spring, a move to relax the controls over the country, began in March. But in August 1968, the Soviet tanks moved in to control the country.

President Nixon was a pivotal figure by opening up the dialog with both Russia and China. He went to those countries in an attempt to thaw relations.

In a move to try to get an oil pipeline through its southern border Russia move into Afghanistan. In what became their Vietnam, with heavy personnel losses and a drain on their economy, they were forced to exit in 1990.

President Reagan began a military build up that directly challenged the Soviets. His “Star Wars” missile defense shield and his foreign policy based on “Trust, but Verify” set the stage to change the U.S.- Soviet relationship.

Soviet losses through war and their inability to keep up militarily or technologically with the U.S. finally forced the Soviet Union to re-trench. Their premier, Mikhail Gorbachev, tried reforms to open up the tight system. These reforms were glasnost, perestroika and democratization. These reforms allowed the problems of the USSR to be uncovered and become public knowledge.

The history of the Cold War shows that direct confrontation between the two main adversaries was avoided at all costs. There were many causes for the collapse of the Soviet Union. Probably the most important one though was that in the end, the Soviet system didn’t work.