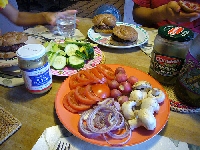 Is it dinner or supper (who cares, let’s eat!)

Is it dinner or supper? We’re eating, isn’t all that’s important? In today’s time, supper is normally used to describe a more informal family meal taken either in the kitchen or dining room. Dinner, on the other hand, will mostly consist of a formal meal with guests, large portions, and dress codes to boot.

Where one lives in the world and what customs he or she grew up will help to explain how they view the aforementioned eating times. In the end, though, the meal should be about more than just a specific title. It should be about family, friends, good food and wine, camaraderie, and laughter.

The title of the meal should simply be an excuse to enjoy oneself with good company and great food.

Kathryn Hill at The Kitchn offers some interesting tidbits on the history of meals.

In colonial times, farmers tended to be too busy to eat their three meals. So they stuck with only two. The wealthy of the time were able to eat all three meals, which they called breakfast, dinner (midday), and supper (before bed). The largest portion took place in the middle of the day and consisted of a hearty meal.

The lighter meal was what people of the time normally ate before heading off to sleep. During the 1800’s, the system changed slightly for those with wealth as dinner moved toward the end of the day, with a lighter lunch being eaten during early afternoon times.

For those in the middle class, though, the customs remained somewhat similar, with the main meal being taken in the midday and a lighter meal served before heading off to bed. This was because the stove fires in the era took time to get started. So much so that the housewife would simply keep them going after breakfast and up until the large meal served at midday. By doing this, she wouldn’t have to start two slow burning fires a day, and could instead focus on other duties of the time.

It can be a number of things, depending upon where one lives, social customs, class level, and more. It can be a meal taken during the middle of the day, which is hearty and filling. Or, it can be the evening meal in a more formal setting.

It can be a lavish affair, as well, with guests. It may be a large meal with multiple courses, taking place in a fancy setting. Obviously, the term can mean different things to different people. In the end, it’s about good food, jovial interaction with friends and family, and taking a few moments out of your day to savor the simple things in life.

So, What Is This Lighter Meal?

According to the Merriam-Webster Dictionary, supper is usually a lighter meal served later in the evening. If the largest meal is taken around midday, then supper will be a lighter affair near the end of the night.

It can consist of lighter fare, like crumpets, biscuits, tea, and milk. Wine, cheese, soup, bread, and more can also be consumed. It all depends upon from where you hail and what customs you’ve been raised to live by.

So, is it dinner or supper? No matter what you call it, the main thing that is important is the company, the food, and the good times. No matter whether it’s a burger at your local joint or a steak and a bottle of the finest wine available, the time together should be cherished, the food should be savored, and it shouldn’t matter what we call it as long as it’s an experience we’ll remember and cherish until at least the next meal.

The Kitchn: Survey: Dinner or Supper?

Professor’s House: Is It Called Supper, or Dinner?

Above photo attributed to Florian