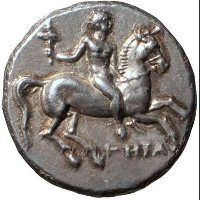 Coin collecting opens up an curious world rooted deep in history. A number of collectors who prefer ancient coins often began with relatively modern ones. Then they discovered how fascinating and compelling ancient history is, especially when explored through a favorite past time.

You can learn history by collecting ancient coins and figures like Socrates, Aristotle and Pythagoras become much more than names in a textbook. They become real people who may have touched the very same coin you get to hold in your hand. Who knows? Find an old U.S. coin and maybe Mark Twain, Benjamin Franklin or Susan B. Anthony used it to pay for a shoe shine of office supplies.

While you won?t be able to tell for certain if famous figures bought their morning coffee with your latest find, you will know one thing for sure. Using credit cards, debit cards and online payments is a relatively modern shift in how people pay for goods and services and receive payment for work. This means most ancient coins were used daily for thousands of years, touched by thousands of people over time.

The more you find and research, the more you learn history by collecting ancient coins. As objects, coins from ancient civilizations are fascinating to look at. See the beauty of ancient Greek design in action on their currency, created not long after the invention of coins.

It?s easy to get started

Contrary to what you may think, ancient currency doesn?t require a lot of money or expertise to collect. Actually, the supply is very high because rulers of many famous societies had coins made in large quantities. Whether you want to start with Corinth, Rome or Athens, coins from these great cities are still very common and affordable.

It can be a bit overwhelming to decide where to begin. Avoiding counterfeits and building a dynamic collection will require a willingness to learn and study. This should be an enjoyable experience, so consider researching and seeking coins from cities, rulers or time periods that capture your imagination.

Follow that sense of awe and take the time to read about these societies and the designs of their coins before you begin to seek them out. This way you?ll have a clear sense of what you?re looking for. When you hold your very first ancient coin in your hand, a solid piece of ancient history, you?ll feel why so many collectors get hooked.

Stamped precious metals were used as currency exchange as far back as 7th Century, B.C. The stamps indicated to merchants the value determined by the purity of the metal or its weight. Some of the earliest coins were made of a silver and gold alloy called electrum.

Once the process to separate gold from silver was developed, separate gold and silver coins spread throughout the Mediterranean in the 6th Century, B.C. Unlike today, these coins were made by hand from bronze, gold or silver. The process involved pouring hot metal into a mold, hammering and engraving designs by hand, hence the variation in coins from the same place and time.

Where to find them

The sources are similar for finding both modern and ancient coins. You can buy them from individual sellers online, at auctions, local shops, coin shows and catalogs. Beware of prices that seem too good to be true as this is a red flag for a fake.

Ready to learn history by collecting ancient coins? Enjoy this tangible journey into the past.