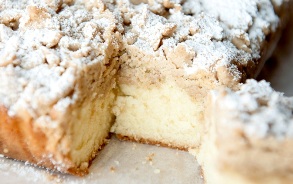 Of the endless ways to decorate a cake, a tumble of crumbs seems to have beaten them all hands down.

At least, that’s according to the millions of Americans swearing allegiance to crumb cake, a buttery treat introduced by German immigrants in the late nineteenth century. Standard versions feature a smear of yellow pastry holding up a mountain of snow-like crumbs. But spin-offs do exist and are limited only by the imagination.

A crumb-coated chocolate cake veers far from the original recipe but isn’t likely to disappoint the chocolate-obsessed. Two versions stand out, and neither is subtle. One has an all-chocolate layer topped with white-and-black crumbs made from powdered sugar and cocoa. In the second version, silky chocolate ruffles through a rich yellow batter and supports jumbo-sized crumbs made by rubbing together butter, sugar, and flour. A drizzle of melted white and dark chocolate chips completes a dessert that’s pure evil. 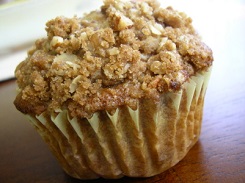 Either standard or mini muffin pans are used to make these handheld versions of crumb cake. Also known as coffeecake muffins, some recipes conceal spirals of streusel-like cinnamon sugar. Owing to their diminutive size, these cakes are short on crumbs. But they make up for it with generous helpings of toasted walnuts or pecans.

Handfuls of mini chocolate chips are tossed into an airy buttermilk cake batter. This variation comes in the shape of a standard sheet or loaf pan. The pea-sized crumbs are made with both white and brown sugars. Once out of the oven, the cake is doused with even more chocolate chips and no shortage of confectioner’s sugar. 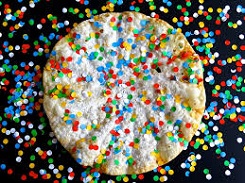 The most festive version of crumb cake serves up a double dose of confetti sprinkles: they’re baked into the bottom layer and mixed into the cinnamon crumbs on top. Sour cream in the batter balances the cake’s sweetness. The drizzle of white chocolate provides a luxurious touch that’s hard to beat. 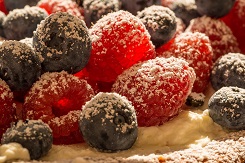 This favorite brunch or dinner dessert features fresh raspberries poking through a creamy yellow batter. Many recipes add a spoon or two of raspberry preserves to boost flavor. The crumbs here tend to be golden in color and crunchy. Their almond flavor comes from extract baked into the cake and sliced toasted almonds thrown on top. 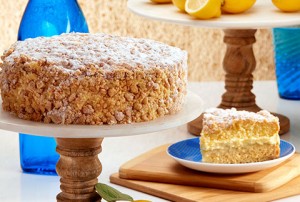 Baked in a rectangular or round pan, a limoncello-inspired crumb cake’s texture is highlighted by the delicious cake crumb covering it. A popular version is filled with lemon cream, and infused with the delightful flavor of the Italian liquor, limoncello. This is a beautiful crumb cake, better served as a dessert than a breakfast treat.

The combination of cheese, butter, and cake sounds over-the-top, and it is. Commercial versions of cheese crumb are made by spreading a ribbon of sweetened cream cheese down the length of an oblong yeast dough that gets folded up around it. The crumbs don’t usually contain cinnamon and are so sparse you’d think they were an afterthought. 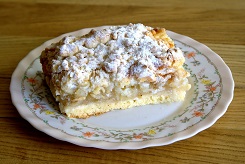 Any New Jersey diner worth its salt bakes its own apple crumb. Patrons know it as one of the standby pastries displayed on the counter right next to the cheese Danish and corn muffins. A half-inch layer of sandy shortbread is piled high with thinly sliced apples bound by a lemon-scented mixture that resembles pie filling. Scattered on top are pebble-sized crumbs flavored with cinnamon and allspice. 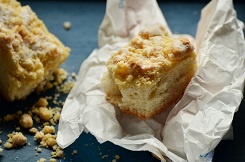 If crumb cake had a prototype, this would be it. “Streuselkuchen,” as it’s known in Germany, comes closest to the original recipe. What sets it apart from its derivatives is a lightly sweetened bread-like base that gets its rise from yeast. A two- to three-inch tower of cinnamon crumbs covers every inch of the cake’s surface. One version of German crumb mass-marketed for decades by bakery retailer Entenmann’s became a favorite of Frank Sinatra. And a bake shop in Hoboken, N.J. known for its recipe was asked to Fed Ex a piece of the rich morsel to a hospital in California so a cancer patient who moved there could enjoy it one last time. 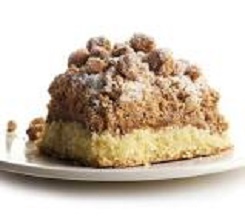 Fanatical describes the following this version has attracted. This is the crumb cake sold by the slab at bagel shops and coffee houses in the New York-metro area. Baked in a shallow pan, some recipes of this egg-rich cake call for a full pound of butter. The hefty crumbs are soft and get their toffee-like flavor from dark brown sugar, cinnamon, and vanilla. Copycat versions on food blogs are coveted by home bakers. The wild popularity of New York-Style Crumb has led big-name food authorities such as Martha Stewart and Cook’s Illustrated to claim their recipe as the most authentic.

A list of ten crumb cake variations is by no means definitive, especially for a sweet that’s garnered a cult-like following. But it’s a healthy start for soon-to-be fans who can be sure they won’t get bored choosing a favorite.