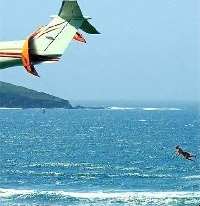 Extreme kites are for those with the need for speed

As the name implies, extreme kites go way beyond a leisurely day at the park lounging in the sun with a kite secured to your toe floating gently in the breeze. If Benjamin Franklin had any idea what people would end up doing with kites, we may still be sitting in the dark.

Dictionary.com defines extreme as such: ?of a character or kind farthest removed from the ordinary or average: extreme measures.?

Another definition is ?utmost or exceedingly great in degree: extreme joy.?

For extreme kite-folk, these are apt descriptions.

You see, extreme kites are used to take extreme measures for the sake of extreme joy; at least by those who get an adrenaline rush flying 15 feet in the air on a surfboard on the coast of the Pacific Ocean. You know the type; they look at a guy jumping off a perfectly good bridge with a rubber band tied to his ankle and think ?you know, I?ve really got to try that,? and actually mean it!

Extreme kiting is akin to surfing in that it rocks cool surf gear, has its own vernacular and an group of fans who feel the bond of their love the sport.

Extreme kites have multiple uses, but share a common theme: propelling a person really, really fast or taking them up into the air really, really high; or both.

The means an extreme kiter chooses to be propelled are many and varied. A few of the more popular examples are modified versions of skateboards, skis or snowboards, kitebuggies (these are used for landboarding; in other words flying along at 50 mph on the sand or desert floor-Yowsah!) and the aforementioned surfboards.

As thrillseekers continue to search for new and more extreme ways to feed their need for speed, extreme kites are gaining in popularity.

For those lucky enough to live near a beach on either the West or East Coast, there?s a good chance you?ve already seen kitesurfers going to the extreme.  There are also a number of schools that have opened to teach those borderline insane (but in a good way) folks interested in trying out an extreme kite in whatever form they choose.

For some of us, the best kites remain the tie-to-the-toe-while-lounging type; without the prospect of lift-off. But for the adventurous among us, an extreme kite will get the heart racing and the body flying like nothing else can.