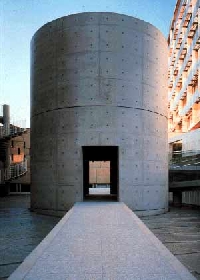 The answer to what is concrete is more complicated than “cement”

What is concrete? It’s not “just cement”!

Concrete is a commonly used construction material known for its compressive strength and versatility.  Though it is often confused with or mislabeled as cement, concrete is actually an admixture of Portland cement, aggregate (sand, rock, and gravel), and water.  When mixed, a chemical reaction between the Portland cement and water binds the separate materials together, and the resulting material solidifies and hardens.

Once cured, concrete acts as a stone-like building material, but unlike stone it does not need to be cut and is easily transported.

Concrete has been used in some form for thousands of years– it was employed in the construction of Egyptian pyramids and was commonly used during the height of the Roman Empire.  It came to prominence during the Roman Architectural Revolution for its versatility and strength relative to traditional brick and stone construction methods, and allowed for greater flexibility in designing complex arch and dome structures.  It was also valued for its strength and ease of installation on large-scale civic works such as aqueducts and bridges.

Following the Roman Age concrete did not appear as a commonly used building material until the mid-18th century, although it?s unclear what caused the decline in its use.

In 1756 British engineer John Smeaton produced the first modern concrete by using a mixture of pebbles and powdered brick with cement, and in 1824 inventor Joseph Aspdin invented Portland Cement, which has remained the primary cement used concrete production.  The final element of true modern concrete was introduced by Parisian gardener Joseph Monier in 1849, when he began embedding iron mesh to reinforce concrete gardening pots.  This technique eventually led to the widespread use of reinforcing bars or mesh (typically steel in modern construction) in creating reinforced concrete.  Rebar, as it?s commonly known, serves to combine the tensile strength of the metal bars with the compressive strength of concrete.

In modern construction concrete is found in many applications.  For its compressive strength, relatively cheap cost, and easy installation, reinforced concrete is commonly used as building structure.  Building foundations are frequently made from cast-in-place concrete.

Precast concrete panels are also often used in  a variety of applications.  Cast and cured in reusable molds at a controlled off-site location, the finished panels are cheaply produced and then shipped to a job site, where they are easily erected to form a building?s structure and in many cases even its decorative fa?ade.

Concrete is also valued by designers for its unique texture and workability.  Though it is sometimes considered dull or grey in its appearance, finely finished concrete is often used by architects to convey a particular sense of monumentality or weightiness.  It is also easily formed in nontraditional geometries, and has a particularly tactile appeal–often occupants in successful concrete buildings can?t resist running their hands across the surfaces of the walls.

Liners placed in concrete forms during the curing process can be used to create patterns or unique textures in the finished product.  In modern design there is essentially no limit to the aesthetic or structural applications for concrete.

For HomearchitecturecementconstructionmaterialPortlandwhat is concrete - by Catalogs Editorial Staff