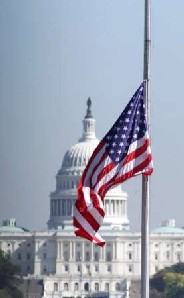 Ceremonies for folding the American flag hold meaning and symbolism

The Stars and Stripes is one of the most enduring symbols of the United States, and holds a special place in the heart of all Americans. The flag of the United States is an honored part of American civics, politics, and history and it is treated with great respect. There are many ceremonies surrounding American flags, from how to raise and lower the flag, when to display it at half-mast, and how to present it to the surviving family of a member of the military.

Because the flag is so revered, there is a special ceremony and ritual involved in American flag folding. The flag of the United States is the only flag honored with this special ceremony.

In the military, the flag is lowered in the evening, when the bugle call sounds the end of the day. When the flag is lowered, special care is taken to make sure that it never touches the ground. The flag is folded into a triangular shape, which is a reminder of the tri-corner hats worn by the soldiers of the American Revolution.

Before you continue reading about the American flag folding there is a special announcement we would like to share with you. Catalogs.com has negotiated special medicare rates for our vibrant community of seniors. If you are over the age of 60, you can head over to our Seniors Health Section which is full of information about medicare. All you need is your zip code and a few minutes of your time to potentially save 100s of dollars on your medicare bills.

First, the flag is to be held waist-high by two people, with its surface parallel to the ground. It is then folded in half vertically, with the lower half consisting solely of the red and white stripes folded over the upper half containing the field of stars.

The flag is then folded lengthwise again, keeping the blue field of stars on the outside. Next, a triangular fold is made in the striped section by bringing the corner of the folded edge up to meet the open edge.

Now, another triangle is made by folding the outer point of the triangle inward. The flag is folded repeatedly in this triangular manner, until only the blue field is visible. The red and white portion of the flag disappearing into the blue field of stars symbolizes the end of day and the beginning of night.

According to USFlag.org, each fold in the American flag folding ceremony has a meaning that is symbolic to the history of our country and its heritage.

The first and second folds symbolize life and eternal life. The third fold is in remembrance of veterans who have given their lives for our country. The fourth fold symbolizes our weakness and dependence on God.

The fifth fold is for our country, with the sixth fold symbolizing the place our country holds in our hearts. The seventh fold is in tribute to the Armed Forces and the eighth fold is to honor mothers.

Our nation has such a rich history, and one way that we can honor that is by taking care of and respecting our American flag.