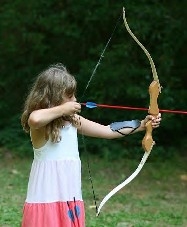 There?s nothing like a stinging thwack in the forearm to remind you to hold your bow steady and pull back the bowstring without shaking or straining. Thwacks hurt. Among experienced archers, they are fodder for friendly ridicule. Among amateurs, the bruises they leave are proofs of the learning process. Thwacks are suffered during archery shooting when the released bowstring snaps back and grazes the forearm. An arrow launch that is not accompanied by proper posture and controlled breathing likely will cause such an ouchie.

Aficionados with expertise in archery shooting who await their prey in any of the comfy tree stands and blinds available today hardly can afford to waste a shot?or an arrow that goes missing in heavy brush or a patch of poison ivy. Likewise, target shooters strive for precision. A thwack will be absorbed by the arm that is fully extended and holding the bow grip. It leaves a bruise and a memory?plus a resolution to do better the next time.

Anyone who enjoys archery shooting has suffered a spring-back bruise from time to time. Most who strive to refine their archery shooting skills eventually invest in various kinds of arm guards?protective shields that strap to the most vulnerable area of the arm. Youngsters who perform archery shooting with specialized youth-sized archery equipment and accessories can obtain arm guards, wrist guards, shin guards, protective eyewear and many other varieties of helpful devices that make archery shooting safer and more pleasurable.

Archery shooting as a sport

Kids and adults, too, soon learn that successful archery shooting requires some strength. Many participants undertake a fitness regimen of some kind. Arm strength and hand strength are factors. A day on the range or in the field entails a heavy expenditure of energy. The wise among archery shooting practitioners?especially newcomers?devise a beginner?s workout that gradually increases strength and stamina.

One becomes adept at archery shooting by practicing. There is no other way to excel. Many archery shooting clubs and professional organizations can be found in most states. There are programs focused on archery shooting in schools. One can take it to an Olympic level, if one chooses. Competitions abound. But it takes lots of practice to master archery shooting and stay thwack free.

~
The origins of archery shooting

Archery shooting is an ancient activity. Most people have seen images of Egyptian, Roman or Greek archers. Some Native Americans were proficient in archery shooting?sometimes executed from horseback or next to a fish-laden stream. Bow fishermen today fish from their boats. They stand up to spot a fish, aim and fire. It?s not easy but many archery shooting enthusiasts prefer doing things in an old-fashioned way that pays homage to early pioneers.

Archery lends itself to fantasy

Medieval times saw archery shooting used as a means of warfare and food gathering. Hunters in the middle ages were skilled archers. Today, there are groups who enjoy reenacting those old days. They wear rough, home-spun and hand-stitched footwear based on medieval styles. Impersonators of the wealthy class sport chain mail tunics and headdresses. Peasants tote wine skins and roasted turkey legs, along with their bows and arrows.

Primitive bows and other archery shooting gear are their preference. It is rather like the legions who every summer dress up to attend their local Renaissance Faire, assemblies of would-be knights, wenches, craftsmen and sports lovers adept at jousting, axe throwing, knife throwing and archery shooting.

Archery shooting contestants most often use a recurve bow or a compound bow. A compound bow has a wheel on each end that carries the bowstring. A recurve has notches on the limbs. In addition, primitive bows can be found, along with exotic styles and bow fishing styles. Some other equipment is pretty much universally used.

? A quiver is a container that holds arrows
? An arm guard protects the forearm
? A finger tab protect the string-holding fingers
? Bulls-eye targets are used to refine skills
? A record book keeps track of target points

It?s true that a person embracing the sport of archery shooting needs to invest in ?or borrow?some basic equipment and accessories. But what they need most is common sense and consideration for others?whether on the target range or in the woods. Safety is a goal at all times and practice is a priority. It is practice that leads to perfection?and the elimination of thwacks.