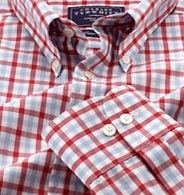 What should men wear to work when casual business dress is called for?

Just what exactly is “business casual?”  This question has plagued many a man and caused some problems in the workplace.  From simply losing the tie, to wearing a golf shirt, menswear on “casual day” or in a casual office will mean something completely different from place to place.

How Casual is Casual?

You need to know what your office means by casual.  You can find out simply by asking other co-workers, but probably a better way to handle this is to ask your supervisor.  It’s easy to get misinformation from a co-worker, not because they’re trying to hurt your standings with the boss, but simply because they themselves don’t really understand the policy.

It’s best to find out from the boss or the policy setter what the policy on casual dress is, whether it’s an everyday option, or only on “casual day,” which is usually on Fridays.

In the most formal of workplaces, “casual” can simply mean “no tie.”  You’ll still wear a jacket, shiny dress shoes and a dress shirt.  You’re allowed to lose the tie for a day, but that’s about it.

My personal opinion on that is “why bother?” but then, the only times I usually wear a suit and tie is at weddings and funerals, and not always even then.

This almost non-existent level of casual day will usually only exist in the most formal of offices, such as a lawyer’s office or that of a politician.

In the most casual of office settings, even jeans are acceptable, which is the very symbol of casual.  Even in these settings, sneakers and T-shirts are still usually a bit over the top, but I’ve even seen that from time to time.  This will usually be in an artsy kind of office, like that of a photographer, artist, writer, etc.

It’s no more common than that office that refers to casual day as the day you can skip the tie, and maybe even less common.

The great majority of offices fall in between these two extremes.  Most of the time, business casual will mean Dockers rather than more formal slacks, golf shirts (aka Polos) rather than button up shirts, and loafers or some other semi-casual footwear rather than shiny dress shoes.

It’s much more relaxing than the old jacket and tie (aka ball and chain), but not Saturday backyard wear like T-shirts, jeans and tennies.

No matter what the case, you need to find out before you attempt to dress casually in your office what the policies are, what is acceptable and what is not, and when casual dress is appropriate and when it’s not.

Business casual is a great way to create loyalty and camaraderie in an office, but don’t abuse it.  If people don’t abide by the parameters set in the company policy about casual wear, you’re likely to lose the privilege.