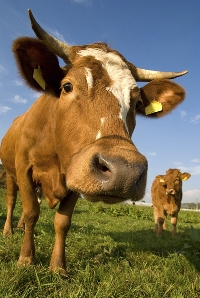 How much do you really know about cows? You might be surprised.

Even though it may be true that no cow ever jumped over the moon, there are many facts about cows that might surprise you. For example, facts about cows include that a Holstein?s spots are like a fingerprint; no two cows ever have exactly the same pattern of spots. The cow is found in almost every country in the world, and is responsible for supplying around 90 percent of the world?s dairy needs (milk, cheese and yogurt). Apart from being useful in terms of milk and meat, in some countries, like India, Hindus consider the cow to be a sacred animal.

Cows were first domesticated about 5,000 years ago. They are not indigenous to America, as it was the Pilgrims who first brought them to the shores of the New World. Cows are very social animals. They form large herds and will bond to some herd members while avoiding others. They ?moo? and use different body positions and facial expressions to communicate with each other.

What are some other interesting facts about cows?

The cow?s most valuable asset is of course the milk, which farmers have extracted for centuries by developing their own milking aids to make the process as easy and productive as possible. One of the most interesting facts about cows concerns when they give milk; a cow can only do so for the first time after she has given birth to a calf. The average cow will produce about 200,000 glasses of milk in her lifetime and it takes exactly 340 squirts to fill a standard-sized milk pail.

What are some of the different breeds of cows?

There are about 920 different breeds of cows in the world. Cows are considered cattle of which there are two distinct species: Bos taurus (Holstein, Guernsey, Jersey, Brown Swiss) or Bos indicus, which are humped cattle like the Brahman. Some cattle are crossed between these two species. The smallest type of cow is the Dexter, which originated in southwestern Ireland and was bred specifically for milk and beef.

What are some other facts about cows?

The bond between a cow and her calf is very strong and continues long after the calf is grown. In non-commercial herds, some cows will nurse their calves for up to 3 years. An adult cow weighs about 1,400 pounds.

The cow is one of the few creatures in nature to have more than one stomach. Actually, there is only one stomach with four distinct digestive compartments. These are: the rumen, reticulum, omasum and abomasum. The rumen is the largest and acts as a fermentation chamber. The abomasum is comparable in both structure and function to the human stomach.

Cows have cloven hooves. In galloping through boggy places or in deep mud, they can run even faster than the speediest horse! This is due to the fact that their toes spread, which means that their very wide feet do not sink as deeply as do those of the solid-hoofed horse.

A cow has about 207 bones in its body and can drink 30 gallons of water a day.

It is possible to lead a cow upstairs but not downstairs, because a cow’s knees cannot bend properly to walk back down.

There are many facts about cows that would make humans appreciate them more.

As it is, most of us take them quite for granted every time we sip a glass of milk.

It?s time for some self-esteem and when you get there, milk it dry!!!