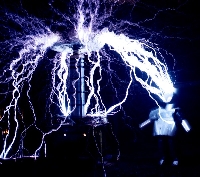 As it’s commonly used, electricity is a term that describes a number of phenomena related to the flow of electric charge. Let’s look at some facts to help us understand what electricity is, and how it affects us in our everyday life.

– Though the scientific definition of the word “electricity” is somewhat vague, in everyday terms we can take it to mean the electromagnetic field energy sent out by batteries and generators.

– Electric energy occurs when an atom’s electrons are stimulated by a generator. All matter is made of atoms — an atom consists of a densely packed nucleus and electrons (which carry a negative charge). Some matter, such as wood or plastic, is made up of atoms with tightly packed electrons — because the electrons do not move these materials act as poor conductors of electricity.

– The movement of electrical energy is known as current, and is commonly measured in amperes (or amps). Amps can be thought of as the measure of electrical energy present, or more specifically as the number of electrons in motion. In order for this current to flow there must be a “pressure” pushing it– this pressure is referred to as the voltage.

– Current is conducted in what’s referred to as a circuit. A circuit consists of a source of energy (the generator), a load, and two wires to carry the current between them. The larger the wires used the faster the current will flow.  As the electrons are moved they carry energy, which can be used to power a motor, or to generate heat (which creates light in a light bulb).

– Batteries work by producing electricity from two different metals in a chemical solution. The reaction causes an imbalance of electrons, which will travel through the circuit from one end of the battery to the other.

– Electricity was first introduced to the general market for the purpose of providing light.

– Energy is difficult to store. As such, it must be fine-tuned to meet short-term consumption demands.