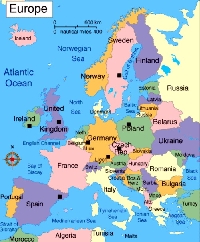 An Overview of Europe’s History, Ideal for History Curriculums or Lesson Plans

Stretching from the Atlantic Ocean on the West, to the North Sea and Arctic Ocean, across the Mediterranean Sea to the Caucasus Mountains in the Southeast, to the Caspian Sea and Ural Mountains in the East, Europe has been celebrated as the cradle of western civilization.

1.   Although Europe is listed as the second smallest continent in the world, it is the third most populous continent, boasts a vast cultural diversity, and serving as home to over 800 million people.

2.   The word Europe is actually a reference to Greek Mythology. Europa was a Phoenician Princess, who was abducted by Zeus and taken to the Greek island of Crete.

3.   Paris is celebrated as the largest city in Europe, boasting a population of over 10 million people.

4.   Here is one of the most unusual and fun facts about Europe:  The country of Wales is credited with having the longest name for a European town. The town named Llanhyfryddawelllehyn-afolybarcudprindanfygy-thiadtrienusyrhafnauole, is translated into English means “quiet beautiful village and a historic place with a rare kite under threat from wretched blades.”  The name of the town was chosen in 2004 to describes dangers that a contemporary wind farm and power station was posing to a endangered species of bird known as the red kite.

5.   Some of the most interesting facts about Europe pertain to the earliest history that established the continent as the cradle of Western civilization. Most notable on Europe’s historic time line is the rise of ancient Greek culture, which gave birth to great minds and philosophers such as Aristotle, Plato, Socrates, Euclid, Archimedes and Pythagoras.

6.   The rise of the Roman Empire and the Roman Catholic Church also had a profound influence on Europe’s history and development. Successes in government, law, language, art, engineering and architecture are some of the most impressive facts about Europe during the age of the Roman Empire.

7.   The decline of the Roman Empire triggered major historic stages for Europe; periods including the Dark Ages, the Middle Ages, the Renaissance and the Age of Enlightenment.

8.   Europe has been the breeding ground for many wars throughout history. Both the first and second World Wars began in Europe. As a result of these World Wars, major empires were forever changed, and former countries no longer appear on maps.

9.   Following World War II, European countries began to move toward establishing a cohesive political community and unified economic policy. The European Economic Community, or EEC, was founded in 1957 when six countries came together to sign the Treaty of Rome.