Football rules of the game 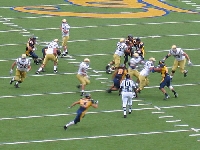 Understanding football rules of game is important for players and fans

We call it “football,” the rest of the world calls it “American football” and everyone agrees that they can make the calls better than the referees. Is that really true? While the intricacies of football may seem complicated, the rules of the game are actually pretty simple.

By learning the basics, anyone can be questioning calls, second-guessing coaches and yelling at the announcers with the most loyal longtime fans. The following simplified rules are for professional football; college and high school rules differ primarily in the length of quarters and how ties are settled. Learn them and you’ll be able to watch and enjoy a regular season game or the Super Bowl without embarrassment.

Let’s start with the playing field. Football fields are 100 yards long and 53 yards wide, with additional 10 yard areas at either end called “end zones.” Each team is assigned an end zone to defend. The field is lined across every ten yards. The lines entering each end zone are marked with poles called “goal posts.”

Before you continue reading about the Football rules of the game there is a special announcement we would like to share with you. Catalogs.com has negotiated special medicare rates for our vibrant community of seniors. If you are over the age of 60, you can head over to our Seniors Health Section which is full of information about medicare. All you need is your zip code and a few minutes of your time to potentially save 100s of dollars on your medicare bills.

Professional football games are divided into four 15-minute quarters. At the end of each quarter, teams switch the end zones they’re defending. The first and third quarters begin with a kickoff, while the team having possession of the ball at the end of these quarters keeps it entering the second and fourth quarters.

The clock starts at the kickoff and stops on incomplete passing plays, when a player goes out of bounds, or when a penalty is called. If a game is tied at the end of the fourth quarter, a 15-minute period overtime is played until one team scores a touchdown (explained next) or one team scores a field goal that is not matched by the opposition.

Each team is allowed only 11 players on the field during play. The team possessing the ball moves it towards the opposition’s end zone by running, passing from a designated passing player to a designated receiving player or by kicking it through the goal posts. The opposing team can take the ball away by picking it up after it is dropped by a runner or by intercepting a pass. The team with the ball has four attempts or “downs” to either score or move the ball ten yards, which gives them four new attempts. A play ends when a player carrying the ball on a run or after catching a pass is stopped or a pass is not completed. If a team goes four downs without moving ten yards or scoring, the ball is turned over to the opposition.

Players must stay on the field during a play. When a player’s shoe steps off the field or “out of bounds” it ends the play, as does dropping a pass before gaining full possession of it. Penalties, usually resulting in a loss of down, are assessed for rule violations such as moving before the play begins, illegally holding an opposing player or hitting an opposing player in a way that endangers them.