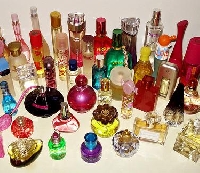 A brief history of fragrances for men and women

Fragances for men and women … what is the difference? The use of fragrances to gain attention and attract members of the opposite sex has been an element of the fashion industry since ancient times. Men’s and women’s fragrances have been characterized as romantic, exciting, glamorous, luxurious, sensual, mysterious and powerful.

The word perfume comes from the Latin phrase, ?per? meaning ?through? and ?fumus? meaning ?smoke?. The early Egyptians believed that perfume would help a deceased soul to enter into the afterlife. Egyptians used oils and creams made from myrrh, frankincense, rose and other exotic flowers that grew along the Nile river.

The ancient Greeks are credited with creating the very first liquid perfume. These used a variety of fragrance carriers such as olive oil or almond oil, combined with water, alcohol and essential oils derived from lilies, roses, orris root and anise root. Both men and women applied these same liquid perfumes.

In Medieval Europe, early perfumes were made from lavender, which grew on the fields and moors.  Women bathed in rose water, lilac water or lavender water, and pressed flower petals and herbs into their skin in order to extract pleasing fragrances.

According to legend, Napoleon used nearly one hundred bottles of cologne each month, and
always wore his favorite fragrance into battle. King Louis XIV of France ordered all members of his court to use a different fragrance each day.

In 1709, A young Italian named Jean-Marie Farina invented Eau de Cologne ?water from Cologne? in Cologne, Germany. This mixture included a base of water and ethanol, laced with citrus oils such as lemon, orange, tangerine, bergamot, lime grapefruit and neroli. It also included floral notes of lavender and jasmine and herbs such as rosemary and thyme. Farina opened the worlds very first fragrance shop in Cologne, Germany and began to sell his Eau de Cologne, which gained popularity around the world.

Throughout history, perfumes and fragrances were considered to be a luxury restricted to those who could afford them. They were not divided into the separate classifications of fragrances for men and women until the 1800s.

In the early 1800’s deeper aromas of musk, tobacco, and spices such as clove and sandalwood became associated with men’s colognes, while floral fragrances such as rose, violet, lily and jasmine gained popularity as ingredients for women’s perfumes.

It wasn’t until 1921 that Ernest Beaux created the famous women’s fragrance, Chanel No. 5 for Coco Chanel.  The original ingredients of this perfume included ylang-ylang, neroili, jasmine, rose, combined with a woody base of sandalwood and vetiver.  Today, the brand of Chanel perfumes has become a multimillion dollar industry.

Today, many of the original aromas in fragrances for men and women have been replaced by synthetic products that are reproductions of hard to find or expensive ingredients. Many modern fragrances are also characterized by the addition of pheromones, or synthetic pheromone cosmetics that have been proven to trigger sexual arousal and emotions such as desire and lust.

Scientific research has proven that men’s colognes, subtly laced with the synthetic male sweat pheromone ?androstadienone? have triggered desire and attraction in women. Women’s perfumes and fragrances containing female pheromones have also proven to be highly attractive to men.

Fashion & BeautyaromaBeautycolognefashionfloralfragrancefragrances for men and womenhistorymenoilperfumescentsmellwomen - by Catalogs Editorial Staff