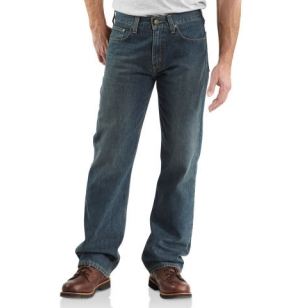 The images that saunter through our minds when we think of blue jeans are as American as Sunday football, but jeans go back over 500 years ? long before cowboys and gold miners pulled up their first pairs of Levis.

The history of denim jeans takes us back to 17th-century Europe. Not to the bodies of princesses and lords, but to their draperies and linens as only the very poor first wore denim garments.

Before you continue reading about the History of denim jeans there is a special announcement we would like to share with you. Catalogs.com has negotiated special medicare rates for our vibrant community of seniors. If you are over the age of 60, you can head over to our Seniors Health Section which is full of information about medicare. All you need is your zip code and a few minutes of your time to potentially save 100s of dollars on your medicare bills.

The origin of the name ?denim? is believed to go back to Nimes, France where weavers are credited for making the fabric then referred to as ?serge de Nimes?. Some historians say ?De Nimes? eventually became ?denim? on the English tongue. Historians also say the term ?jeans? comes from Genoa, Italy, where the fabric was also widely produced. Denim was pricier than jeans because it was woven with one colored thread and therefore stronger than jean, which was woven with two.

According to an article in the Wall Street Journal (2011), the history of denim jeans in Europe is documented in paintings. Few garments from its earliest days survive because at the time the poor wore their denim garments until they fell apart. To get to the story of denim jeans in America, we have to jump forward a few years to around 1789.

The History of Denim Jeans in America

In 1789, President George Washington himself toured a Massachusetts textile mill. This mill was one of several using American cotton in an effort to reduce the country’s dependency on expensive foreign imports. Then in the late 18th and early 19th century, indentured servants and slaves wore denim as cotton plantations kept the material in high supply. But it wasn?t until 1873 that Levi Strauss&Co. created and patented their first denim pants. With a reputation for strength and durability even after many washes, denim was the perfect fabric for miners during the Gold Rush, cowboys and other laborers.

By the 1920s, waist overalls were the pant of choice for many American workers. Movies further increased the popularity of jeans in the 1930s when cowboys on the silver screen made the utilitarian fabric finally look cool. Under Hollywood?s influence, Americans across the country began purchasing jeans as casual wear.

The manufacturing of denim decreased during World War II. However, American soldiers abroad wore denim pants in their free time and thus introduced the style to the international market. Not long after, denim became widely popular with teenagers. Celebrities like James Dean in ?Rebel without a Cause? and Elvis Presley helped elevate denim pants into a symbol of rebellion. This reputation was probably helped when some schools banned them.

Despite the popularity of denim, the fabric was often mistakenly referred to as ?Jeans?. In the 1960s, Levi and other companies accepted this and began calling their pants ?jeans? even though they were still made out of denim.

As styles continued to change, the jeans in the 1960s were often embroidered or embellished in other ways. By the 70s, hip-huggers, bell bottoms and pre-washed jeans were everywhere from school halls, to music festival and protest marches.

Remember those glossy ads and slick commercials from the 1980s? Brands like Jordache and Calvin Klein gave the world slimmer, butt-hugging pant known as ?designer jeans?.  The price of jeans rose in proportion to name recognition and design that went into to them, and by the 1990s jeans began to fade from must-have lists.  Though they paired best with trendy-at-the-time flannel, jeans were so common they were uncool. Teenagers expressed themselves instead with loose combat and carpenter pants, or fitted khakis.

With the turn of the century, designers gave denim a new attitude. Everyone from Versace to Dior included denim on the runway, and not only as pants. Denim garments like dresses, jackets, shorts and skirts are more popular than ever. Jean lovers are perpetually in search of the perfect fit as trends continuously cycle through. Best of all, a good pair of jeans is no longer a budget breaker because many designers have affordable collections in national stores like Target and Kmart.

The biggest trends in denim today are bright and bold, though black, dark wash and white jeans remain a closet staple.  Though the fabric comes from Europe, denim?s versatility, working class history, and timeless style is all American.