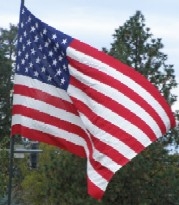 Learn some facts about the history of the American flag

Most of us grew up hearing the story of Betsy Ross as the first step in the history of the American flag.  And we know that over the years, more stars were added to represent new states that joined the union. But what else do you know about the flag’s history. There is some disagreement about who actually made the first American flag.  Popular history says it was Betsy Ross in May of 1776, who sewed together the fabric that became the first flag of a new nation.  But that story was not told until many years after her death, when a grandson reported it as a tale told to him as a child by family members, who in turn said they had heard it from other family members.

In fact, there is no historical record or evidence that shows who made that first American flag.  A family legend heard by a child is all we have to identify that first seamstress — or tailor. One flag maker who is a well-documented part of the history of the American flag was Mary Pickersgill. In the summer of 1813, Mary Pickersgill, an experienced maker of ships? colors and signal flags, was hired to sew two flags for Ft. McHenry in Baltimore.  She, her daughter (age 13), nieces (aged 13 and 15) and an indentured servant (aged 13) spent about 7 or 8 weeks making the flags.  One was a 17′ x  25′ flag known as a “storm flag”, meant to be flown in inclement weather. The other, a huge 30′ x 42′ flag, known as a fort or garrison flag, became the inspiration for the “Star-Spangled Banner,” penned by Francis Scott Key at that fort in Baltimore.

Why does the flag have stars and stripes?

On June 14 in 1777 the Continental Congress officially decided upon the layout for the first American flag when they passed the first Flag Act Resolved, That the flag of the United States be made of thirteen stripes, alternate red and white; that the union be thirteen stars, white in a blue field, representing a new Constellation.

This day is commemorated in a minor holiday that appears on most U.S. calendars but is little observed, called Flag Day.

But the history of the American flag does not end with that decree.  Over the years, Congress has altered the look of the flag in several ways.

~
Changes to the American flag

The history of the American flag, like the history of the country itself, is one of adaptation and change. Between 1777 and 1960, Congress and the Executive branch passed a number of acts and orders that changed the shape, design and arrangement of the flag, including:

?    April 4, 1818 – This Act returned the flag to 13 stripes and stated that there would be one star for each state, to be added to the flag on the 4th of July in the year following the admission of each new state.

?    June 24, 1912 – An Executive Order from President Taft dated established fixed proportions of the flag and provided for arrangement of the stars in six horizontal rows of eight stars each, with a single point of each star to be pointed upwards.

?    January 3, 1959 – An Executive Order from President Eisenhower rearranged the stars into seven rows of seven stars each, with the rows staggered rather than aligned.

According to tradition, although the source of these are not clear, the colors of the flag are symbolic as well.  The red is said to symbolize hardiness.  The white symbolizes purity.  And the Blue symbolizes justice.

Even if it’s difficult to separate the myths and stories from the true history of the American flag, it still acts as a symbol of the country and the people who make up its ever changing face.