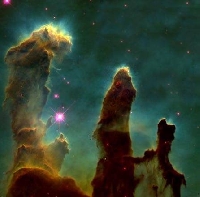 ar One of the most fascinating books I ever read was A Brief History of Time by author and British Theoretical Physicist Stephen Hawking.  Hawking, who holds the distinguished post of Lucasian Professor of Mathematics at Cambridge University (a post once held by Isaac Newton) is the most contemporary researcher to set out on quest of answering the most profound and timeless questions: How did the universe come to be?  How are stars born?  How do stars die?  And what are black holes?

Equally impressive is the fact that Stephen Hawking undertook this monumental and historic research while confined to a wheelchair.  This is because Stephen Hawking, one of the most brilliant minds alive today, suffers from the progressive neurological disease called amyotrophic lateral sclerosis (otherwise known as Lou Gehrig?s Disease) a condition which has left him nearly completely paralyzed.

In the late 1960?s Hawking first postulated his ?Big Bang Theory.?  He concluded that if general relativity was true, and the universe was indeed expanding, then a single event must have initiated the birth of the universe.

According to Stephen Hawking, the evolution of the cosmos began in the Dark Ages of the universe, a the 200 million-year period after the last flash of light from the Big Bang faded and the first dim glows of sun-like stars appeared.  During this time, the cosmos was a formless, primordial sea of particles, rich with chemical gases and elements of carbon, oxygen, nitrogen, hydrogen and helium.

How are stars born?  Stephen Hawking theorized that the first stars were shaped out of fire, ice, and other elemental gasses, molecules and dust particles coalescing after the big bang, in the Dark Ages of the Universe.

Today, with the aid of NASA?s Hubble Telescope, scientists have been able to glimpse some of the most detailed images of embryonic stars in interstellar space.  These images have served to substantiate Stephen Hawking?s original research on the topic, how are stars born?

In 2009, scientists asking how are stars born, were rewarded with one of the most spectacular images that the Hubble Telescope has yet to deliver.  This image provided a clear account of a star birth in the nearby spiral galaxy M83, nicknamed by NASA as the Southern Pinwheel.

Slowly, scientists have come to understand that a star?s life lasts only as long as the star has plenty of hydrogen fuel to burn.  A star may live for several million years.  Although this may seem like a long time, it is merely the blink of an eye compared to the age of the universe.

As a star begins to die, a transformation occurs.  The specific type of transformation depends on the size of the star.  Ultimately, a star will become either a neutron star, a black dwarf, or a black hole, depending on how massive it is.