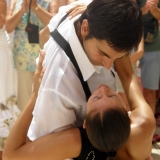 Music is a tool for manipulating emotion, so handle with care

For as long as man has walked the earth, music has been a vital part of our culture, lifestyle and collective memory.

Ancient cultures used music as a mnemonic device to imprint vital stories and myths onto young minds, passing down tribal histories. Almost anything you need to memorize from a shopping list to a formula like E = mc2, may be set to music, locked quickly into memory for later retrieval and use.

So, how does music affect people?

It’s best to make your own little tunes for items and not melodies already tied to lyrics to remember your lists. The tune of “Happy Birthday”, for example, conjures images of birthday occasions and memories and can’t work as well as your own ditty for this week’s grocery list. Try a rap, some rhymes or your own melody for a fun replacement to the old written list.

Most everyone understands how music becomes elegant in courtship and romance. A piece of music heard even once might be forever joined to a personal sense of place and powerful sense memories. What was your choice of wedding song as you walked the aisle? How was the theme of your high school prom played, by a live band or on a CD? What songs do you find most patriotic or most exciting or sad?

Music can unlock and evoke powerful religious emotion. The church has a centuries-old history of music in worship. The medieval church recognized the ties between music and our emotions and composed might hymns of power and glory, many of them echoing the songs of the Bible including Miriam’s song of deliverance following the parting of the sea and the angels who sang of Christ’s birth and will trumpet the songs of the Second Coming.

The Apostle Paul suggested encouraging oneself or other Christians in corporate worship through song (Ephesians 5:19) and rabbinical tradition is consistent that rabbis (“teachers”) are often also to be cantors (“music worship leaders”) to guide their congregations through song. Indeed, most all litany and congregational worship in Judaism is set to beautiful vocal music. In Islam, the muezzin, the crier who invites Muslims to worship five times daily, must singsong his calls, and a skillful muezzin is said to have a haunting, saddened quality to his music.

According to the American Music Therapy Association, music is curative and restorative for a wide variety of conditions, even as aid to help with physical rehabilitation and assisting those with disabilities. Music therapy can ease the pains of chemotherapy, lower anxiety or lift a depressed person’s spirit, and as you may already know, help insomniacs get to sleep. As cited by the American Cancer Society, music is unable to cure cancer or chronic disease, but it can relieve aches and symptoms while augmenting a patient’s joy and general wellbeing.

Autism Research Institute published a fascinating position paper demonstrating the clinical use of music in assisting autistic children with speech therapy. Key questions and answers were set to music and over time, the music would no longer be required for the child to respond with the appropriate response to each question. Perhaps autism’s links to latent math ability in children and the rhythmic, mathematical nature of sound combine to play a helpful role in this therapy.

With music therapy recognized today as a medical tool, colleges in most states and Canada are offering bachelor’s degrees in the field as a result, and some are even pursuing careers in music thanatology to help hospice and terminal patients and their loved ones. One series of studies led to the name Mozart effect for the positive outcomes the famed composer’s works had on stimulating activity in areas of the human brain.

In practical terms, you can apply some of music therapy’s techniques for yourself. Savor music, discuss the meanings of lyrics with loved ones and write your own music or lyrics to tunes you love.

Music As Your Personal Energy Drink

You can use music to incite yourself to perform at a high level, using a favorite song to bring your energy and emotions to the front of your mind. You’ve heard or seen a chant at a sporting event, placing the athletes at a fever pitch, or a political rally bringing the crowd to their feet and clapping, but have you played a favorite song to get ready before embarking on a big project?

One fascinating study demonstrating how music does affect people was planned in response to a pool of office workers requesting a bit of music to make their days on the job more pleasant. Would their claim hold true that they could work better with music than without?

The typing word count of the secretarial pool showed little or no change between sessions with and without music. Pressure sensitive pads were then placed under the keys of their typewriters and it was discovered the keys were struck harder when the music played than when it wasn’t. Staff worked harder to get the same job done, concentrating against the background music, and feeling more tired at the end of the day.

Yet a personal favorite song can stimulate your adrenalin and get you going fast. Remember the heroic tunes of composers John Barry and John Williams? Whether it’s the theme from Dances With Wolves, Star Wars or Raiders of the Lost Ark, adventure themes provoke powerful responses where we, too, feel like heroes ready to tackle anything. An estimated one-half the world’s population has heard Barry’s arrangement of the James Bond theme, and listening to it in the car I always drive much faster!

Music can thus lift our spirits as we purposefully alter our state to an alert and excited one. Music may also soothe the savage breast as William Congreve wrote, but it’s sometimes too strong medicine. Soft music played in the corridors, like painting walls pink, has been shown to mellow even hardened criminals in prison, but after some duration the incarcerated can become more aggressive than before.

When asking yourself how does music affect people, use melodies for the times of your life but remember familiarity heard may breed contempt.