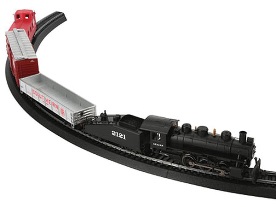 Here is how to clean model trains without damaging them

If you are truly a devoted collector of model trains, you know that sooner or later you are going to have to clean them in order to keep them looking bright and well-cared for. The problem is that sometimes there is a real worry that the way you clean something like this might actually damage the train and make it inoperable. In reality, there are some ways that will allow you to clean these models that will keep them looking as good as the day you got them and will also keep them running as if they were fresh out of the box.

You need to know how to clean model trains carefully and effectively if they’ve managed to get a variety of different types of environmental dirts and grimes on them.

When you are talking about a dusty model train, there are a couple of ways that will work best of all. Some people feel as though the best way to get rid of dust on something the size of a model train is simply to wash it thoroughly. This would certainly do the job, but it would also likely leave the train shorted out and no longer working. This worry obviously doesn’t matter if you have a train that doesn’t actually run but is only for display. Even trains that are not meant to run can pose a problem if they are run under water, especially if decals are featured. Sooner or later those decals will start to come off if they are wetted enough.

The best way to get rid of dust while still keeping your model train in pristine condition is a combination of compressed air and small brushes. The compressed air will do a good job of shooting most of the dust off the body of the trains and the brushes come in handy in order to get into the nooks and crannies of the train where the dust might be able to hide from blasts of air.

It would also pay off to actually brush the entire train, from top to bottom before you start blasting it with air. This will save you time since you won?t have to go over the same areas again and again.

There are going to be times when you need to do something more than a brush and blasts of air. Sometimes the grime on the surface of the truck is too much to simply wipe off if you want to get the model looking as though it was brand new. While we already talked about the fact that it’s never a particularly great idea to use wet cleaner on these models, there are times when you simply have to in order to get them clean.

Museums have actually posed as a good model for the best way to clean your models and keep them looking good. You will want to use an extremely mild solution of soap and water with the soap making up about 1 percent of the solution. Even with the soap and water mixture, you aren’t going to be dousing the model in water, but using a damp cloth or towel. You do not want to use a full on wet towel but one that is just a bit more damp than dry.

You’ll want to work slowly and methodically and try your best not to scrub, especially on parts that might be partially or completely covered by decals. This particular process is actually going to involve quite a bit of trial and error. You are going to want to see just how wet and just how hard you can wipe before it appears to be hurting the train. It’s better for this process to take some time, than to go quickly and end up ruining the model.