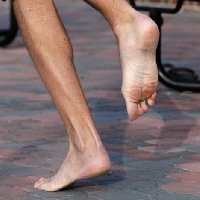 However, there are those barefoot running aficionados that wouldn?t run any other way. Some barefoot runners (BFR) insist that shoes are the main reason they get injured when running and that is why they?ve ditched the footwear. It is quite easy to injure your feet when there is no protection between feet and the ground if the runner is inexperienced and doesn’t know what he is doing.

So how do you prevent barefoot running injuries?

One of the main perils of barefoot running is that the runner does too much too soon in his bare feet. Feet that are accustomed to being in shoes and, which are suddenly set free and run upon are going to be weak from wearing shoes. Muscles, bones, tendons and ligaments in the feet aren?t as strong when people wear shoes all the time so a weakened foot when first exposed to barefoot running is susceptible to injury. Furthermore, the soles of the feet are going to quake, at least at first, when making contact with the ground and actually feeling the ground for the first time, realizing that there is no cushioning between them and the ground.

Barefootrunninguniversity.com advises starting out in your bare feet slowly, giving your feet a chance to adapt. Overdoing it can cause blisters, over-use injuries, ligament and tendon damage and stress fractures, which are going to put you out of the running game altogether.

Proceed with caution. If your feet are hurting, stop. When a bare foot is exposed to this type of pressure repeatedly soft injuries can occur. It takes time for the foot to get strong enough to endure barefoot running.

One of the main complaints of barefoot runners is pain that occurs on the top of the foot. This may be caused by the pressure that is placed on the metatarsal bones when running bare foot. Another frequent complain is calf- and Achilles tendon tightness and soreness, which occurs as the calf and Achilles lengthen when subjected to a zero drop (bare foot) rather than a raised heel shoe drop when running. When bare footed, the forefoot and the heel are at the same height, which they aren?t when wearing a running shoe.

The calves are going to work harder when running barefoot. To prevent soreness, try to make sure that the heels touch the ground every time a stride is taken. This will help disperse some of the energy that is emanating from the Achilles tendon and the calf. Do not run on the toes. The heels need to touch the ground.

When pain is felt, stop, and resort to the RICE approach: Rest, ice, compression and elevation. Some persist on running through the pain, which isn?t always a good idea. This can cause the metatarsal bones to experience a stress fracture.

Another concern that has to be addressed when running in bare feet is puncture wounds. The runner is likely to step on something, such as glass. Look where you are going and be careful where you are stepping.

Barefoot running can reduce the incidence of injuries or lessen their severity as well as prevent sore joints and muscles; however, the barefoot runner must learn to shift into movements slowly and master foot and knee movements to prevent those injuries that can occur when running without shoes. Barefoot runners must learn how to position their body and how to land appropriately.

One of the hazards of bare foot running is being overly cognizant of running without shoes and as a result overcompensating, which can cause the runner to fall over or injure himself.

Running without shoes takes more energy, according to studies done on runners, and those not wearing shoes use less oxygen than those who wear shoes. It is believed that barefoot runners land on their feet more softly than shod runners because they are aware that they don?t have the cushioning that a shoe wearer has. Landing softly puts less strain and impact on the entire body. Furthermore, barefoot runners land in the middle of their foot which helps their running form, as well as lessens the incidence of injury.

Some runners opt for minimalist running shoes rather than going barefoot or before transitioning to bare feet.