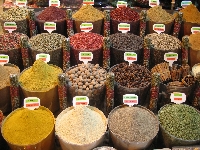 The extent of some cook?s repertoire when it comes to seasoning food is using salt and pepper or sometimes nothing at all, which results in really bland tasting fare. Then there are the polar opposites, who douse food with an assortment of exotic spices. It takes some time in the kitchen to learn how to season food.

Spices are buds, seeds, flowers, bark, fruits and roots of plants whereas herbs are the leaves of plants. Keep in mind that spices are sharper tasting than herbs.

Both spices and dried herbs can be kept for a long time in an airtight container that is placed in a cool area. Ground spices can be stored for 12 months, which is twice the length of time that dried and ground herbs can be kept.

Those in the know recommend using freshly ground or grated spices as opposed to those that come in a jar because they taste better. Of course you will need a spice grinder. Homegrown herbs taste better and have more flavoring power than dried herbs.

When preparing sauces or soups season using salt and pepper at the very end rather than in the beginning because the natural salt content gets more intense as the soup or sauce reduces. If salted in the beginning it is going to be too salty.

Chili powder, which is used in chili (soup) and is comparable to curry powder, consists of ground chilies and fiery spices.

Nutmeg is frequently used in candy, baked goods, eggnog, puddings, vegetables, sauces and meats. It is kind of sweet and has a heady fragrance. It is warm and delicate.

Allspice is called allspice because it tastes like nutmeg, cloves and cinnamon combined. Cooks use allspice in jams, preserves, pickles, marinades, chutneys, cakes, stews, soups, curries, biscuits and meat pies. There are lots of ways to incorporate allspice into your cooking. It?s very popular in the Caribbean, from which it originates.

Cinnamon is used to flavor hot drinks including cider and is used in desserts. For many people the smell of cinnamon it is reminiscent of Christmas. Cinnamon has a bittersweet flavor. Some people like to add it to chilies, stews and curries.

Paprika is dark reddish orange and is used to flavor deviled eggs, seafood and potato salad. Paprika can be hot or sweet.

Ginger is a spice that is added to Asian dishes, primarily. It has a very distinguishing aroma.

Cayenne is very hot. It?s a red pepper that is found in Southwestern and Latin American dishes. Use it cautiously because it can be overwhelming

Cumin is a smoky and hot spice that is use in southwestern and Latin American cuisine.

Saffron is fragrant and frequently found in rice dishes and soup.

Clove is used in desserts and baked meat dishes. It is sweet.

Turmeric has earthy tones and is used when preparing salmon, chicken, vegetables and it often the base in curries.

Herbs that you should have in your kitchen for seasoning purposes include:

Rosemary is an herb that is the most heady and scented of all herbs. It can be added to pork, pizza and tomato sauce.

Basil tastes like a combination of cloves and licorice. It can be used on tomatoes, in soups, sauces and sandwiches. It is considered one of top culinary herbs.

Thyme is always found in European kitchens. You can combine it with rosemary, sage, parsley, oregano and sage and use it on duck, pork, goose and lamb. It is also used in Creole and Cajun cooking.

Oregano is put in tomatoes sauces, on pizza and takes very much like marjoram, but it less sweet and heartier than marjoram. If you want your food to take on an Italian or Greek flair, add oregano.

Parsley can be used in nearly everything that you cook. It has a grassy, mild flavor that doesn?t overcome other ingredients but enhances them. Parsley is sometimes placed on a plate fore decoration.

Cilantro (or coriander) is quite multi-talented. It adds flavor to chicken, fish, salads, vegetables, salsas, soups, curries, stews and vegetables. Some people love it, others hate it. It is pungent.

Chives are great on baked potatoes or in a dip. Don?t leave them over heat for long because the heat will ruin their oniony flavor.

Sage smells like a combination of mint, lemon, cedar and eucalyptus. It is used in turkey and dressing.

Dill is good with seafood and in cucumber dishes and cottage cheese. It gives food a sharper and fresher flavor.

Tarragon has a licorice-like flavor and is good with chicken, omelets and fish. It can also be used as a garnish.

Garlic is quite powerful. It is used in Italian foods. It has a very distinctive and powerful smell.