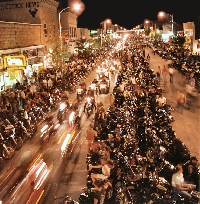 Immerse yourself in biker culture at these classic motorcycle destinations

Motorcycle rallies have fueled biker culture for almost as long as motorcyclists have been organizing themselves for social rides. It?s no coincidence that some of the largest events are also the oldest, dating as far back as 1916. Bikers are loyal to the events they enjoy and many people simply can?t afford to attend more than one rally a year. Today?s classic motorcycle destinations are week-long celebrations of all things motorcycle.

Sponsored by biker organizations and manufacturers, beer companies, hotels and other businesses, motorcycle rallies attract hundreds of thousands of motorcyclists and enthusiasts annually. Motorcyclists make plans a year in advance to attend major motorcycle rallies, readying their bikes, outfitting themselves with the latest motorcycle apparel and gear, and organizing fellow motorcyclists to ride into town en masse.

Here are a few classic motorcycle destinations, including the ‘Big Two’, Daytona and Sturgis.

Before you continue reading about the Classic motorcycle destinations there is a special announcement we would like to share with you. Catalogs.com has negotiated special medicare rates for our vibrant community of seniors. If you are over the age of 60, you can head over to our Seniors Health Section which is full of information about medicare. All you need is your zip code and a few minutes of your time to potentially save 100s of dollars on your medicare bills.

With over half a million attendees annually, a rally that began with two hundred riders in 1937 is now one of the largest motorcycle destinations in the world. Also known as ?Bike Week?, the event is hosted by Harley Davidson Destination Daytona, the largest Harley dealership in the world, according to the Daytona Bike Week website.

Over the years, the Daytona rally has expanded to a 10-day festival that continues to offer lively events including concerts, beachfront rides, bike shows and a full week of races. Attendees stay in local hotels or pitch tents in area campgrounds.

Founded by the Jackpine Gypsies Motorcycle Club in 1938, the Sturgis Rally began with a line of nine riders. Today, nearly half a million attendees converge in South Dakota every August for this classic week long rally. The Jackpine Gypsies Motorcycle Club owns the 40 acres of land adjacent to what becomes the busiest stretch of interstate during the Sturgis Rally. As a result, the grounds offers a motocross track, lighted short track, field meet area and a hill climb area, in addition to rides and concerts hosted at nearby venues.

As one of the largest bike events, you may catch your favorite rock band playing between the hundreds of races during the rally.
~

Established in 1916, Laconia Motorcycle Week is one of the oldest motorcycle rallies in the United States. As one of the ?Big Four?, it?s also one of the largest. Held every June, attendees enjoy hiking and camping in the area?s national parks, and participating in the week?s many scenic highway and byway rides. Other events include Hillclimb/ Drag races, parades, swap meets and concerts.

The first Republic of Texas Biker Rally (ROT) was held in June of 1995. Since its beginning, the event has rapidly grown, attracting over 40,000 bikers and enthusiasts annually. The rally is held on 130 acres at the Tavis County Expo Center. In addition to a 9000-seat air conditioned arena, there?s a 4- acre vendor mall and outdoor amphitheatre for concerts and festivities.

Even if you don’t make it to the Rally, you can enjoy the many rides in and around Austin. Time your trip to match up with SXSW or the Austin City Limits Festival if you love music as much as you love bikes. You won’t be disappointed in either!