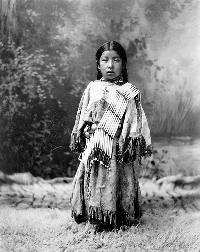 The people of the Sioux Nation honor nature, animal spirits and the Great Spirit through their handmade jewelry. For hundreds of years, the Native American Sioux jewelry traditions have captured the culture?s beauty and spirit. Using natural materials and items acquired through trade, the various factions that make up the Sioux Nation continue to create ornate patterns in jewelry that tell the story of their culture.

With 13 Sioux political subdivisions making up seven major tribes, the original Sioux homelands include what are now the Dakotas, Minnesota and Wisconsin. Over time, autonomous tribes traveled through Iowa, Montana, Illinois and Nebraska. Today, Sioux bands, or tribes, live in Nebraska, the Dakotas and Minnesota.

Native American Sioux use glass beads, coral, shell, wood, silver and copper for jewelry making. The materials used in jewelry came from their natural surroundings, a reflection of their home and way of life.

Before you continue reading about the Native American Sioux jewelry traditions there is a special announcement we would like to share with you. Catalogs.com has negotiated special medicare rates for our vibrant community of seniors. If you are over the age of 60, you can head over to our Seniors Health Section which is full of information about medicare. All you need is your zip code and a few minutes of your time to potentially save 100s of dollars on your medicare bills.

In addition to materials gathered through trade and nature, the Sioux hunt for food and use the remaining parts of an animal to make tools, clothing and jewelry. Bones, antlers and sinew, muscle tendon (used for thread) are common materials used in Sioux jewelry ? nothing goes to waste.

The Sioux use symbols and patterns in their crafts and clothing to represent their people and spirituality.

The buffalo represents mother earth. For men, it represents their role to protect their tribe.

The bear signifies medicine and healing as it demonstrates an instinctual knowledge of herbs.

The eagle is a positive sign. Because it flies higher than other birds, it?s considered to see everything from its vantage point.

The Native American Sioux are highly skilled at beadwork. Prior to obtaining colorful glass, metal and clay beads through trade, they carved beads from turquoise, wood, ivory and coral.

The Sioux use a number of traditional techniques to fashion their jewelry. As hunters, bones are used in necklaces, chokers and protective breast plates by drilling holes into the bone. Horns are hollowed and dried, then sawed and chiseled for buttons and decorative disks.

Metal jewelry became popular with the Sioux when the European settlers arrived and began trading. Today, copper earrings and bracelets are still popular types of Native American Sioux jewelry. Tin cones are strung from medicine bags and leggings to add a decorative fringe.

One look at the skilled craftsmanship and ornate patterns of Sioux jewelry shows this culture?s enduring connection to the natural world.