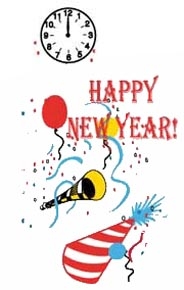 Nearly everyone in the United States makes New Years resolutions.  And nearly everyone breaks them.  Making and breaking these self-promises has become as ubiquitous as celebrating New Year’s Day itself.

Since virtually everyone makes these resolutions, why is it that so few are ever kept?  Some might argue that it’s because breaking your resolutions each year is socially acceptable and expected, and there’s probably some truth to that.

However, might it not be because we consistently shoot too high and make unrealistic goals?  Remembering two words will help you to succeed with this year’s resolutions; moderation and specifics.  Here are some suggestions for how to keep those new years resolutions this time around.

Losing weight is the number one resolution in America, yet we continue to get fatter and fatter every year?  Why is that?  This year don’t just say you want to lose weight, make specific plans for how you’re going to accomplish that goal, and make them realistic.

Drink less sugary drinks.  If diet drinks are simply intolerable to you, you’re not alone.  For years I resisted diet drinks.  I simply hated the aftertaste.  Diet Dr. Pepper was the only one I’d tried that I could even tolerate. Then just recently I found out that I actually like diet root beer.  I started drinking it and in no time I found that I was beginning to like diet Dr. Pepper too.

I also found that other diet drinks were becoming more and more tolerable, if not enjoyable.  If even diet root beer doesn’t do the trick for you, go half and half.  Start cutting your drinks by using half of the regular drink and half of its diet counterpart.  It’s much easier to tolerate and enjoy and it cuts your calories in half until you’re ready to take the next step.

Eat healthier foods.  Stop making hamburger with the typical hamburger meat which is 80 percent or less fat free meat (which means 20 percent or more pure fat) and instead use 90, 93 or even 96 percent fat-free hamburger meat.  Eat more chicken and white Albacore tuna and less red meat, particularly avoiding the more fatty cuts.
Drop regular mayonnaise from your diet and replace it with a canola-based variety, which tastes (and costs) the same, but has half the calories and includes essential Omega 3 fatty acids.

Eat out less.  Make eating out a treat, instead of a habit.  Rather than taking every opportunity to eat at a restaurant, instead tell yourself you’re only going to eat one lunch and one dinner out per week.  This will not only save you tens of thousands of calories per year, but it certainly won’t hurt your pocketbook either.

So you want to quit smoking?  If you’ve tried to go cold turkey and it just doesn’t work for you, start cutting back instead.  Tell yourself you’re only going to have one pack a week and stick with it.  Have four smokes per day on the weekdays and you’ll have extra on the weekends to reward yourself.  Once you can tolerate that amount without too much trouble, then you can cut back further.

You want to drink less?  Don’t make a vague resolution that you’re simply going to drink less.  Get specific. Tell yourself that you won’t have more than one drink a day, or even better, that you’ll only drink on certain days of the week.  Make a resolution that you’re only going to drink on Friday nights and Saturdays, and maybe Monday nights during the football season, and stick with it.

Cutting back on these unhealthy habits won’t just extend your life, but it will save you tons of cash, making that longer life more pleasant.
Money

Well, you’ve already slowed down on eating out, smoking and drinking, so you’re way ahead of the game as it is.  Here’s how to carry that further.

Start saving money.  Don’t just tell yourself you’re going to save more this year.  Make a plan and make it happen.  Start taking $250 out of your pay each month to save.  Have this done automatically by your employer or your bank.  If you have to remember it yourself you risk forgetting or simply deciding to use the money “just this once” each month until you drop the resolution altogether.

Have the money automatically deposited into an account that you never look at.  If you watch this account, the temptation to tap into it will grow more and more as the account grows.  The best thing to do is to forget that the account is even there.  Treat it as if that money doesn’t exist.

You have too much credit card debt?  You’re certainly not alone there.  To get that debt under control takes time and diligence.  Here’s how to handle it.  Rather than telling yourself you’re going to pay off your credit cards, instead dedicate an extra $100 per month toward your card with the highest interest rate.  If you owe $50 per month on that card right now, instead pay $150 per month.

As the monthly minimum goes down, keep it at $150 (or whatever amount you start off with).  It will get paid off much more quickly that way.  Once that card is paid off, take the total amount you were paying toward it and add that to your card with the next highest interest rate.

Now on the second card, you’re paying the monthly minimum, plus the original monthly minimum for the other card, plus an extra $100 per month.  As the amount you pay off increases with each card, you’ll be surprised how quickly your credit cards are paid off.

Note:  Be sure that each time you begin this process with a card, you cut that card up and close the account.  Never spend another penny on that particular card.  Once you get down to your last credit card with the lowest interest rate, keep paying it off, but keep that one card for emergencies and never get another credit card again.

Investing.  You’ve wanted to invest in the stock market, but you’ve never had a lot of cash to do this?  Start off small.  These days, there are many online brokerages that charge small fees for trading and you can trade virtually any amount.  $500, $300, even $100.  Start with a very small amount and purchase just a few shares of a stock you like.  Keep that stock and later on when you have another couple hundred dollars, buy some shares of another stock.  If you keep this up, you’ll be surprised how quickly they build.

If you want to keep your new years resolutions, be sure to make them reasonable.  If you resolve to lose 100 pounds, stop smoking or get out of debt, you’re probably going to fail, but if you resolve to lose a small amount per month, cut back on smoking or start paying down debt slowly, one card at a time, you’ll mostly likely be able to stick with it.  No matter what you want to change about your life in the coming year, try being moderate and specific.  It will make your new years resolutions more likely to succeed, and you’ll feel better about yourself.