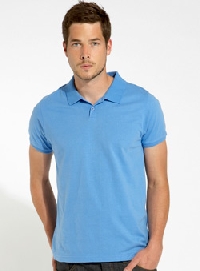 Here are some facts about the ubiquitous polo shirt

Where did the plain polo shirt come from?

The plain polo shirt has a long and noble history that is deeply rooted in the world of sports. Also known as golf shirts and tennis shirts, the T-shaped collared shirt has typically two or three buttons and an optional pocket. Usually made of knitted pique cotton, these tee shirts are sometimes made from silk, merino wool or synthetic fibers.

The earliest wearing of the plain polo shirt dates back to the late nineteenth and early twentieth centuries when tennis players wore their ?tennis whites,? which were long sleeved, white, button-up shirts that were usually worn with the sleeves rolled up. Flannel trousers and ties competed the tennis ensemble, creating many problems for the players concerning ease of play and comfort.

Before you continue reading about the Plain polo shirts there is a special announcement we would like to share with you. Catalogs.com has negotiated special medicare rates for our vibrant community of seniors. If you are over the age of 60, you can head over to our Seniors Health Section which is full of information about medicare. All you need is your zip code and a few minutes of your time to potentially save 100s of dollars on your medicare bills.

Polo players also wore thick long-sleeve shirts made of cotton and these shirts were the first to have buttoned-down collars. They were invented because they prevented the collars from flapping in the wind while players rode across the field. John Brooks, an early president of the famous Brooks Brothers, took note of this fact while attending an English polo match in the 1890s and began producing such a shirt. This type of ?button down? polo shirt is still made today.

Although today there are many polo shirt varieties, it wasn?t until 1920, when an Argentine-Irish haberdasher and polo player named Lewis Lacey introduced a shirt with the embroidered logo of a tennis player. In 1927, Rene Lacoste, all-time tennis champion, designed a white, short-sleeved, loosely knit piqu? cotton shirt with an un-starched collar and a longer back known as a ?tennis tail? that was far more comfortable than the traditional attire associated with tennis. The American press referred to Lacoste as an alligator, a moniker he embraced and encouraged by placing a crocodile emblem on the left breast of his shirts.
~

Lacoste?s new plain polo shirt addressed several problems associated with the sport of tennis. The short, cuffed sleeves solved the tendency of long-sleeves to roll down; the soft collar could be easily loosened via unbuttoning and could be worn upturned to block the rays of the sun from the player?s neck. The type of cotton employed breathed along with the player and the new ?tennis tail? prevented the shirt from pulling out of the wearer’s trousers or shorts.

The Lacoste tennis polo shirt was heavily marketed during the 1930s, and since that time has become a standard category of clothing. Polo players readily adopted the more comfortable Lacoste shirt for their own sport and by the 1950s, the name polo shirt became synonymous with tennis shirt. Today, every major clothier makes some variation of Lacoste’s original tennis shirt and women wear polo shirts in as often as men.

The plain polo shirt is widely used in athletics today, including non-athletes associated with sports through their jobs; such as golf caddies and sports announcers. So remember the long history of the plain polo shirt the next time you buy one. Treat it with respect but resist the urge to salute. After all, it?s only a plain polo shirt.