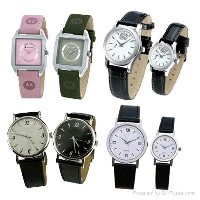 A mechanical — or automatic watch — and a quartz watch are the two primary types of wristwatches. So which one should you chose?

A quartz timepiece includes a battery that activates a crystal, which is inside. It vibrates about 33 times in a second. The vibrations are interpreted as impulses by the computer chip, which keeps the electronic motor working and moves the hands.

An automatic, or mechanical, watch derives its energy from a wound spring. It keeps time via the regulated release of energy that comes through the wheel train, which is a set of gears.

The mechanical variety doesn?t have to be re-wound for 40 hours. Newer models can actually go for eight or 10 days before being re-wound.

Some mechanical timepieces are self-winding while others require manual winding. To self-wind the wearer must turn the button on the outside. This part is called the crown.

An automatic self-winding timepiece rewinds via a rotor that is turned by gravitational force. This force happens when the person wearing it moves his wrist.

A quartz watch is not subjected to stress from a wound mainspring and it is usually less expensive and yet more precise time-wise than a mechanical one.

Quartz endures shock better than automatic, although any piece of time-keeping jewelry can be damaged. The low mass  and its lack of moving parts helps protect it from damage. There is less abrasion and wear and tear.

A mechanical watch can endure high temperatures, which quartz can?t.The components of an
automatic one are all susceptible to damage. If you take care of this type of timepiece it can last a long time.

Quartz doesn?t last as long because it consists of electronic circuitry, which has a limited natural life.

It is relatively easy to get replacement parts for an automatic watch. Quartz batteries have become obsolete and you can?t easily find replacements.

Aside from time accuracy, the craftsmanship of the piece as well as its appearance is important.