In the carefree days of the sixties, when gas was cheap and global warming unknown, the Trans Am ruled the road. Named for the Trans-Am Series race, the Pontiac Firebird erupted on the racing scene as one of the first mass-produced sports cars.

Drivers ditched their boxy sedans for the smooth coke-bottle lines and unbridled horsepower of a new Trans Am.

There was only one place for a car that could accelerate instantly, turn on a dime, and fly off a ramp—Hollywood. With its beauty and brawn, the Trans Am would inspire movies filled with car chases and stunts, ex-convicts and spies.

Here are the top ten Trans Am moments in TV and film. 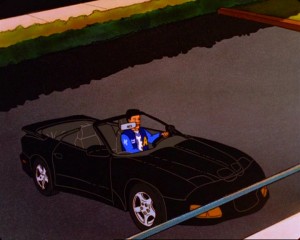 Animated series King of the Hill brought the Trans Am into a new dimension by adding a cartoonized Pontiac Firebird to the show. Arrogant high school football player “Flyin Hawaiian” David Kalaiki-Alii roars through the fictional town of Arlen, Texas in his Firebird.

Who can forget the opening credits of ChiPs, the cop buddy show that propelled the motorcycled officers of the California Highway Patrol into sex icons? Officers Poncherello and Baker were always arriving on the scene to disentangle a pile-up. One of the shows most intricate stunts involved a race with a metallic orange 1970 Pontiac Firebird. 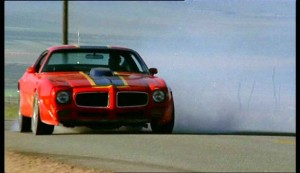 Cannonball, another classic, featured martial artist David Carradine racing a red 1970 Pontiac Firebird Trans Am, with single Transam headlights in a cross country race from California to New York. Naturally, this is no joy ride: if “Cannonball” Buckman loses, he’ll have to face the mafia. So the races becomes a smorgasbord of car flips, fires, and skidding on dusty roads.

Good Guys, the most recent offering of Trans Am shows, was a short-lived cop buddy series that was cancelled after one season. It certainly wasn’t cancelled because of the cars: hard-drinking character Dan Stark spent much of his screen time driving his 1979 Firebird.

Bounty hunter Papa Thorson, played by Steve McQueen, speeds across the country in a 1979 Pontiac Firebird bringing in convicts. In one of the best scenes, the Trans Am goes to the mattresses with a combine tractor in a cornfield. The Trans Am barely escapes being mowed down, only to be blown up by a stick of dynamite. Hunter was not only a great Trans Am movie, it was also the last movie to star Steve McQueen, as ardent a racer off-screen as he was on-screen.

Showing the apocalyptic, industrial wasteland that the world will be in 2012, Death Race proposes the unique plot of a convict whose warden strikes a deal: if he can win a car race, he will be given his freedom. Death Race showed a 1977 Pontiac Trans Am, mounted with a 50 calibre gun, that resembled an armored tank more than a muscle car.

The Hitchhiker, one of HBO’s first series, was a successful blend of horror, suspense, and irony which inaugurated the careers of scores of Hollywood stars. Trans Am fans will say that the presence of a red 1982 Pontiac Firebird in the show was a major cause. 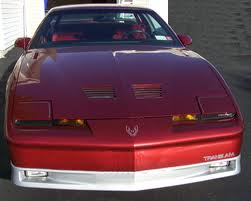 Carnivore, a horror flick about a predatious creature cooked up by a secret government agency, might have been a flop, but the 1988 Pontiac Firebird, a third-generation Trans Am, caught the eye of movie-goers. The teenagers in the film, fleeing from the creature, take to a dark country road in the two-toned racer with pop-up lights. If only they hadn’t left the car.

Burt Reynolds starred in Smokey and the Bandit as Bandit, the incorrigible adventurer who takes a bet to deliver a truck of Coors Beer in record time. Driving a 1977 Pontiac Firebird, Reynolds burnt out tires , summoned friends on the CB radio, and sped off bridges to evade the sheriff. Capitalizing on the success of the movie, Pontiac designed a special edition “Bandit” Trans Am that is a collector’s piece today. 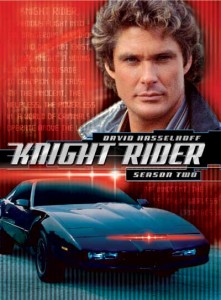 Knight Rider was the first show about the friendship between two unusual vigilantes, a man and his talking car. Kitt, short for Knight Industries Two Thousand, was a 1982 Pontiac Trans Am with an 8-speed turbodrive transmission , rocket motors, and an indestructible shell.