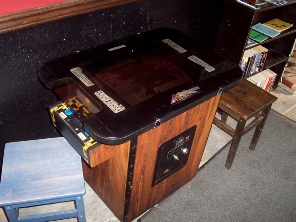 The classic arcade game used to be all the rage. Kids and adults alike spent hours on end in noisy spaces filled with big stand alone arcade games. Now computer and hand held gaming has largely replaced the arcade experience as our games travel with us on phones, tablets and laptops.

That doesn’t mean that the arcade has been completely forgotten. Some of the games that were so popular back in the 1970’s and 1980’s have managed to survive, while other originals have born sequels or prequels or long running series. With this list, take a trip down memory lane as we look at the top 10 Arcade games ever.

Like many of the most favorite arcade games, Burger Time also made it onto the early consoles like the Nintendo NES. The game was simple enough, you simply ran around, making sure that every little ingredient lands in the right order on the bun. You had to accomplish this while running away from evil hot dogs and eggs.

Centipede is another game that managed to make it to consoles eventually but was much more popular when it was first released in 1980. The game consisted of a plot that was similar to several other games of the era, where you shot the parts of a giant centipede that was coming to get you, piece by piece. If it reached the bottom, you died.

Qbert was sort of a 3-D version and evolution of the original Pac-Man. The game was actually sort of revolutionary in its use of the semi-3D format in which the title character hops around, trying to match the colors of the different Cubes on screen.

This particular game was actually one of the latest generation arcade games, but it makes the list because of just how different it was. Despite the fact that by the time (1996) the game was released most people had moved to the console, this was still pretty popular wherever it could be found. The game incorporated the use of light gun technology along with a pedal you had to step on at just the right time to make a game that would rope you in quickly.

Yet another game that started off in the arcades and made the move to the console almost completely unchanged. Flying around in a starship taking on alien hordes is nothing new these days, but in 1981 the game was something few people had seen up close.

This game was ultra popular, despite its simplicity. While this game won millions of fans, the hero, who was only known as Mario later led the console game wars once he moved there. Super Mario world was born in a game where “Jump Man” did battle with a big monkey throwing barrels.

Asteroids was a game that sported some truly basic graphics but that was quite a bit more complicated when it was actually played. The plot set you inside a ship shooting encroaching asteroids as they float towards you. Of course the asteroids would blast apart, into smaller parts that could still hit you, meaning that you had to shoot them several times in a row.

This was one of my personal favorites because it was such a unique plot. Dig holes in the ground and when you ran into enemies you shot an air hose into them and inflated them until they died. Has there been any game with such an interesting weapon since?

Yet another classic that eventually moved to the console but was born of the Arcade. Ms. Pacman was also of course a sequel to our number one game on the list and was similar in a lot of different ways.

Who would have thought that such a totally simplistic game would be as popular as the Pac-Man game was. It’s still hard to believe that a game where a pie shaped figure darts around a maze, gobbling up little dots and trying to avoid “ghosts” was anywhere near as popular as this. The fact of the matter is that while Mario has been the king of the console, Pac-Man is the undisputed champion of the arcade game.