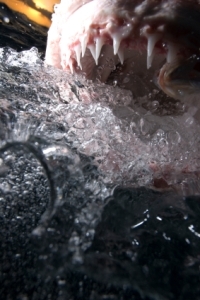 Don’t want to swim with the sharks?

Swimming in the ocean is a favorite vacation pastime – but if you are visiting one of the following shark infested beaches, you may want to wade in the pool instead. The Florida Museum of National History administers the International Shark Attack File (ISAF), a list of all the known shark attacks from the mid-1500s to the present. According to the numbers, the following are the beaches to avoid if swimming with the sharks isn’t on your list of things-to-do.

This beach on the central east coast of the state holds the title of Shark Capital of the World thanks to its large population of tiger sharks, black tip sharks, spinner sharks and others. Experts would tell you that the large number of shark attacks is due to the large number of people in the water. This laid-back, tropical oceanside community certainly attracts tourists of all kinds. Unfortunately, the area also attracts sharks looking for an easy meal in the Ponce Inlet. The sharks often cannot tell the difference between food and people. Anyone up for a dip?

Gansbaai, a small fishing village near Cape Town is nicknamed Shark Alley and has the largest great white population in the world. The area experienced the accidental capture of a 6.2-meter great white in a net; there have been 39 attacks and eight fatalities since 1905. In fact, the shark population is so consistent that tourists who like a little adventure along with their sun and sand can now go down into a cage and observe the great whites (some greater than four feet long) face-to-face. Hello adrenaline!

With over 40 species of sharks making their home within its waters, a large number of tiger and nurse sharks, and a high number of shark attacks (34 since the mid-1800s), including a fatality in 2004, Kahana, West Maui has earned it reputation as one of the top 10 shark infested beaches. In 2004, a surfer suffered a 14-inch bite in his upper thigh and died of blood loss. Although shark experts would say the surfer was probably mistaken for another creature or food source, one might consider surfing elsewhere.

Swimming at this popular resort, just north of Durban, South Africa is actually safe thanks to the shark net warranted by the large shark population. Although the net keeps out the aggressive bull and great whites that live in the area, they also kill many fish and dolphins; the Natal Sharks Board is considering removing the net. Do your research before slipping into the water – you might not be alone.

The North Shore has a high number of sharks and shark attacks. The ISAF reports that since 1882, there have been 24 shark attacks in Oahu – six of which were fatal. Oahu boasts the second highest number of confirmed shark attacks recorded in the Hawaiian island chain. The sharks are so plentiful that the tourism industry offers shark encounter tours where the bold and the brave can venture out in boats and climb into cages for a bird’s eye view of the sharks. Aloha!

Famous for its vast number of sharks, this area – which stretches from Bodega Bay to Ano Nuevo Island near Santa Cruz and out to the Farallon Islands, and includes Tomales Bay, Stinson Beach and the Western Marin enclave of the Bolinas – is stocked with great whites. Known as the Red Triangle thanks to its large population of sharks, Bolinas Beach is undoubtedly one of the top 10 shark infested beaches. As one surfer put it: “If there are no seals in the water, there is probably a shark around – so check for seals before boarding your board.”

Brisbane is another area of Australia known for its large shark population thanks to the encounters with sharks occurring in the Brisbane River. The bull shark, which is aggressive in nature, has been known to travel up the river to give birth to its pups. The area near Stradbroke Island, where a woman was fatally attacked in 2006, is also one to be watched. Overall, the east coast of this southern continent has a large number of shark encounters – but the southern coast experiences more fatalities, thanks to the population of great whites.

Kosi Bay is a series of four lakes that eventually connect to the Indian Ocean. With its large population of aggressive bull sharks, the area has experienced 27 fatal attacks since 1905. Zambezi sharks (the South African name for bull sharks) are numerous. In addition, these sharks forage for food deep into fresh water lakes and rivers, making them especially dangerous. Although the bay offers spectacular sights for snorkelers, one wonders if the sights are worth the scary – in addition to the sharks, hippos and crocodiles make its waters their home.

According to the ISAF, the last fatal attack in this area of the