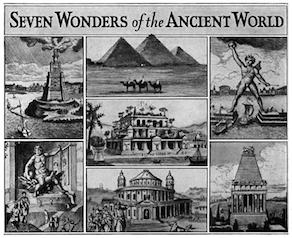 The civilizations of antiquity gave birth to marvels that we would rarely see again for millennia.

These structures struck awe into the witnesses in their day, but even today, it is amazing to contemplate what it took to create these stunning feats of architecture. Take a trip through the ages as we go over the top ten wonders of the ancient world.

The Pyramids of Giza are the only remaining of the original seven wonders of the ancient world. Constructed around 2600 B.C. these pyramids stand at nearly 500 feet tall. They were originally built as monument-tombs for Egypt’s rulers. 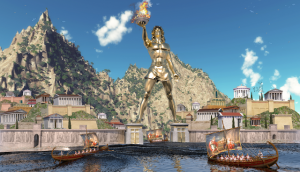 The Colossus of Rhodes was a statue of the Greek sun-god built on the port of the city of Rhodes. It stood one hundred and eight feet high, the same Hight as the statue of liberty. Some of the remains of the original statue are said to exist and as of 2015 there were tentative plans to rebuild the statue.

The Hanging Gardens of Babylon were said to be one the great engineering feats of the ancient world. They are said to have existed around 605 and 562 B.C. when King Nebuchadnezzar II ruled the ancient city of Babylon.

The Lighthouse of Alexandria was estimated to stand over three hundred feet tall and for many centuries was one of the tallest man-made structures in the world. It was built by the Ptolemaic Kingdom around 280 B.C. 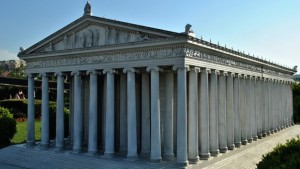 This temple was built and re-built three times in Ephesus, a city in what is now known as Turkey. It was originally dedicated to the goddess Diana. The temple, in its most grand form, stood at 60 feet high and was nearly 500 feet long. It featured paintings and columns decorated with gold and silver.

The Mausoleum at Halicarnassus was built around 352 B.C. in what is now Turkey as a tomb for the Persian king Mausolus and his sister-wife Aretsmia II. It was considered to be one of the most grand and beautiful structures of the ancient world.

4. Statue of Zeus at Olympia

The statue of Zeus at Olympia was built around 435 B.C. and stood over 40 feet tall. It featured a very detailed figure of Zeus, seated on an elaborate cedar wood throne adorned with many precious gemstones and jewels. The statue itself was made of ivory plates and gold panels. 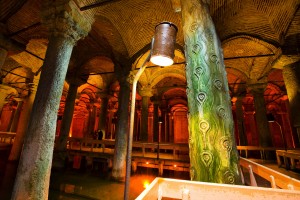 The Basilica Cistern is an iconic piece of ancient architecture because of its ability to secure the one thing vital to the survival of a city under siege: water. Buried beneath Constantinople—what is now Istanbul—the Basilica Cistern held 100,000 tons of water at its’ prime, ensuring that the people behind the city’s walls had a constant supply in the event of war.

Also known as the “Rose City,” Petra is an ancient archeological site found in the desert of Jordan and was the former capital of the Nabatean Kingdom of 300 B.C. The site includes the Al-Khazneh, a visually stunning temple carved into the blush pink sandstone, along with tombs and caves. 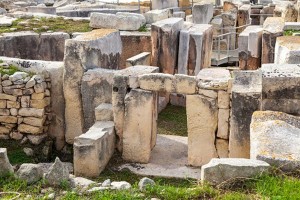 Built in different stages between 3600 and 700 BC, the Temples of Malta exist today as UNESCO World Heritage Sites. With construction beginning as far back as the Neolithic Age, these temples are the oldest freestanding structures in the world. The diversity in form and decoration for such an ancient people is what makes this site particularly astounding.