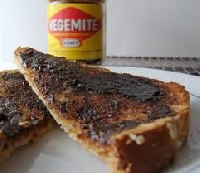 Sandwiches are a tried-and-true lunch idea for millions of kids and adults worldwide. They are generally easy to make, requiring only a few ingredients or foods that are readily found in your fridge and cupboards. They are also easy to eat and clean up after since you can pick them up with your hands – no knife or fork required! Additionally, these are so popular with thanks due to their versatility.

There are hundreds of ways to make a sandwich different simply by changing up the type of bread used, meat, vegetables, fillers, spices and spreads. Still, this meal can get boring fairly quickly if you keep making the same type over and over again.

Think outside of the box by adding a vegemite sandwich to your weekly bread-and-filling rotation.

Vegemite is a food paste made in Australia that is produced from yeast extract. The dark-brown spread typically serves as a filler for bread, toast, biscuits, crackers and crumpets. Highly popular in Australia, the spread does have a unique personality and it’s salty, yeasty flavor may be an acquired taste to many folks.

This is particularly true of people who are more accustomed to a sweeter spread such as jams and jellies. Vegemite is comprised of brewers’ yeast extract, vegetables and various additives in the form of wheat and spices. These ingredients create a spread that is salty and slightly bitter tasting, far less sweet than other traditional spreads such as Marmite hailing from New Zealand and Britain.

Most good sandwiches consist of both an outer and inner layer, with the outside layer forming the structure and the inner layer being the tasty fillings. Try making a different combinations by changing up the type of bread you use. For instance, try whole-wheat, multi-grain, sourdough or rye breads and spread generously with vegemite. You can also switch up the types of breads you use by alternating between soft bread, crusty rolls, pull-apart french bread, english muffins or bagels. Add a fun twist by choosing a bread that is further flavored with herbs, spices and even cheese for flavor overload!

If you like to keep your combinations plain, you may be happy with simply spreading vegemite over your bread and calling it lunch.

However, try stepping outside of your food comfort zone and adding with all kinds of tasty goodies. Slice up some veggies to add some nutrients and a healthy crunch. Sliced bell peppers, carrots and bite-sized pieces of celery all make colorful additions for little calories. If you’re not a big crunchy veggie fan, stick to simpler ingredients like lettuce leaves or sliced tomatoes instead.

Aside from veggies, layer your creation with a protein source such as a deli ham, roast beef or turkey. Even better, try grilling or roasting your own chicken at home and slicing it up for sandwich meat.

When it comes to great lunches and quick dinners, there is no limit to the number of variations you can make for a healthy, tasty lunch meal. Try mixing up your own vegemite sandwich with different breads and fillings and find out which one hits the spot!