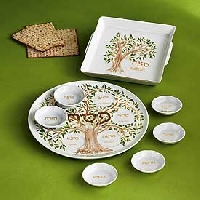 The Passover celebration is centered around the Seder, a ceremonial meal at which Jewish families read aloud, telling all assembled the story of the flight of the Israelites from Egypt over 3,000 years ago. Seder in Hebrew means ?order? and it is conducted in accordance with the procedures outlined in a book called the Haggadah.

Special foods, symbolizing the trials to which the Israelites were subjected during their journey, are placed on a Seder plate. The Hebrew word for Passover is Pesach.

Since the Seder plate is such a dominant part of the Passover celebration, it is an outlet for artistic expression by many Jewish craftsman. There are countless variations that are available online at merchants specializing in religious art.

Seder plates usually have six indentations upon which are placed the prescribed food items indicated in the Haggadah. These, truly, are the symbols of Passover.

1. Charoset– a mixture of tart apples or dates,  nuts (usually walnuts or almonds),  spices (cinnamon and ginger), as well as honey and red wine or grape juice.  Charoset symbolizes the mortar which the Hebrew slavesused to build cities and buildings for the Pharaoh of Egypt.

2.  Baytzah– either a roasted or a hard-boiled egg, symbolizing loss.  There are two thoughts on this symbol:(A) the sacrifice brought to the First and Second Temples by the Hebrews in Jerusalem in biblical times, and/or (B) it is a symbol of mourning for the Babylonians? destruction of the First Temple in either 587 B.C.E. and for the Roman?s destruction of the Second Temple in 70 C.E. Romans. Because it symbolizes loss, the egg became the traditional food for Jews who are in mourning.

3. Zeroah –transliterated from Hebrew as Zeroa, meaning either arm or shoulder bone or wing, it symbolizes the outstretched arm of God when he protected and delivered the Hebrews from slavery. Zeroah is either a roasted lamb shank bone or a chicken shank with some meat still on it. The Zeroah also symbolizes the Korban Pesach, “Passover Sacrifice”, the lamb used just for this ritual. Participants only view this symbol and do not eat the meat on it.

4. Karpas– is symbolized on the Seder plate by celery, parsley, or any other non-bitter vegetable, such as a piece of potato or a carrot. The Karpas is dipped into salt water to symbolize the tears shed by the Hebrews due to the hardships they endured as slaves in Egypt.

5. Maror– meaning bitter herb in Hebrew and is represented on the Seder plate by a bitter vegetable, usually prepared horseradish or horseradish root. It symbolized the bitter lives of the Israelites when under the control of the Pharaoh.

Another important symbol of Passover is Matzo, unleavened bread. The Seder table also includes a separate plate with three sheets of Matzo,  placed one on top of  another, each in a separate compartment in a specially designed Matzo Cover or in the folds of a large napkin. The unleavened bread is symbolic of the fact that the Isrealites did not have time to leaven their bread before fleeing Egypt. During the entire eight days of Passover Jewish people do not eat any leavened bread, only Matzo.