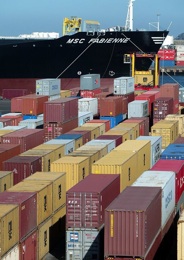 How America is giving its money away

A current account balance is essentially an import/export ratio. If the purchase of imports to a country outweighs the sale of exports from that country a current account deficit ensues. This has long been the case in the United States.

Before you continue reading about the The causes of America’s current account deficit there is a special announcement we would like to share with you. Catalogs.com has negotiated special medicare rates for our vibrant community of seniors. If you are over the age of 60, you can head over to our Seniors Health Section which is full of information about medicare. All you need is your zip code and a few minutes of your time to potentially save 100s of dollars on your medicare bills.

What are the causes of America’s current account deficit?

Until recently, consumer spending had been on the rise in the United States, thanks in large part to a booming housing market. With such expendable income running through the hands of consumers and the rapid move toward globalized production, there was a large influx of exports with a disproportionate sale of domestic products. Add in low interest rates, tax cuts for the wealthy and an already high tendency to import (especially luxury goods like stereos and cars) and you have a rapidly advancing current account deficit.

Low labor costs in foreign markets, especially those in Asia, have facilitated a decline in competitiveness for domestic producers of goods. Even American corporations have moved production facilities to other countries; greatly reducing the influence and scope of U.S. exports.

~
Increased capital investment and a relatively high U.S. dollar have also contributed to expanding the current account deficit. The United States does not save money; it invests it. Likewise, other countries, especially China, are investing billions in American assets. America is the world’s largest debtor and China now holds a significant amount of those bonds. Therefore, whatever profits are made through increased investment will go to China, via a further increase in the buying of imports, and not to reducing the current account deficit.

Is the current account deficit still increasing? Are there solutions?

Thanks to the slumping housing market and a weakening dollar, consumer spending has tailed off a bit since 2005. The purchase of luxury goods is declining, but weakly. The dollar is declining in value, according to economicshelp.org, but not nearly enough to incur a major change in America’s account deficit. Not only that, but while the deficit is essentially an import/export imbalance, a flexible and developed economy such as that of the United States creates a far more complicated problem.

Solutions are myriad, arguable and would involve both the public and private sectors. A push toward marketing U.S. goods is a good start. In addition, consumers need more incentive to save rather than spend and to spend locally when they do. The weakening housing market has certainly had an effect in this direction but this will likely lead to a shocking and sudden drop in the dollar and the economy as a whole. A smooth transition is the prime argument right now.

The answer to questions like “What are the causes of America’s current account deficit?” is simple when compared to determining its solution. So far China is financing America’s current account deficit but this is widely considered unsustainable. Perhaps a move to energy independence is part of that elusive solution. Oil imports, at record high prices, are a big part of the increasing deficit and a move toward renewable, localized energy sources would take a big cut out of a huge deficit.