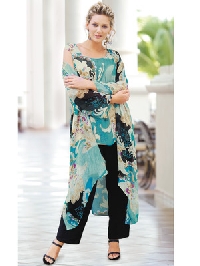 So what in the heck are they, these things we call women’s plus sizes? And who decided to use that rather questionable label? After all, larger mens’ sizes are called “big and tall” which sounds pretty much like a compliment if you think about it.

I started digging into the history of women’s fashions to find the answer to this burning question — and the first answer is that it could be worse. How? How about “Clothes for Stout Women?” Yup…that was designation for these sizes back around the 1920’s.

That’s about the same time merchants started trying to come up with a concept of standard sizes so they could sell clothes via a new tool called catalogs. If women were going to buy clothes from a drawing, sizes were a must.

The fashion is changing, even if the label isn’t

It’s amazing that the fashion industry has remained blind to the demand for stylish, well-made clothing in sizes above 6 or 8, but finally the tide is turning. Designers and manufacturers are starting to put the same style focus on larger women’s clothing as they have on smaller sizes. Specialty retailers are replacing shapeless polyester in horrid colors with women’s fashions that fit and flatter curvier bodies.

More major retailers are featuring women of all sizes in catalogs and store advertising — a trend that started in Scandinavia and has thankfully made its way to England and the U.S. in recent seasons.

What sizes are considered plus sized?

The answer is, it depends. Some sources say clothing sized 14 over. Others made the cut off at 12 and a few at 16. I even found a few fashionista sites that lowered the bar even further, designating sizes 10 or 8 as the start of the plus sized women’s clothing range.

But why split off the larger sizes?

There’s no clear information on who came up with the term, but what I could find was that it did not start as a way of defining certain women as overweight. In the fashion industry of the 1930’s and 40’s, clothing manufacturers used the average women’s size as their standard. Anything larger than that was simply designated as plus-sized. (It’s not clear if there was also a “minus-sized” designation, but one would expect something like that existed.)  It was simple a production term.

But starting around the 1970’s, plus sized became a term for clothing designed especially for larger or taller (or both) women, rather than simply a size grouping for factories. Women who wore a size larger than designers deemed “normal” were banished to separate departments or separate stores, where cheaper fabrics and shoddy designs typically reigned.

Now for the kicker….

The average American woman, close to 2/3 of adult women to be more exact, wears a size 14 or larger. Which means if the answer to “what are women’s plus sizes” was to be answered with the original meaning, nothing under a size 16 at least would fall into that catagory. And the range might well be slightly higher than that.

Now about that label…

Consumers are raising their voices more than ever to demand an end to fashion segregation. Some are calling for a less negative label (curvy women’s fashions, for example), while others are saying that we need to eliminate the barriers entirely.

In the meantime, women who only recently may have been too ashamed to shop for the kind of clothes they really wanted (because they only came in tiny sizes) are finding more flattering fashions from which to pick. And it’s about time!  When roughly two thirds of American women can’t find clothes that fit their body…and their taste…change is long overdue.