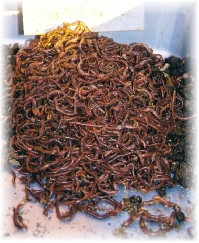 If you?re one of those squeamish people who can?t stand to touch a worm and absolutely cannot fathom baiting a fishing hook with a worm then you probably don?t much care what worms eat.

However, if you knew how important worms are to the environment and to your garden you might be a bit more interested. You might even be interesting in learning what it is that worms eat.

A worm?s choice of food depends on where the worm is residing.

Some worms live close to the surface while others opt to live deep underground. Those who hang out near the surface eat dead leaves and grass and other organic materials. Leaves that have fallen from trees contain a smorgasbord of organisms that the worms like, including bacteria, fungi and algae, which are all integral to a worm?s diet.

Those worms that prefer to live deeper underground eat dirt. They get their dietary needs from the algae, fungi and bacteria that is present in the dirt. When a beneficial garden worm eats and then releases the dirt this is called worm casts or another way of saying worm poop. The casts provide nutrients to your garden.

So it turns out worms and their excrement are beneficial to your garden.

Worms will consume just about any organic material that they find in the soil, including plant remains, vegetables and fruit. Worms don?t have teeth so they soften up the material inside their mouths by moistening it with saliva and then swallow. The food goes to the gizzard, where it is digested and where the food is ground up.

When the food reaches the worm?s intestines is it further broken down and is excreted and, voila, you have worm castings.

Worms cannot survive without moisture. Their skin must stay moist all the time because they breathe through their skin. If their skin dries out they suffocate and expire.

Those who know a lot about gardening and farming realize the importance of worms and of worm composting. This can be done outside in a bin or indoors. Use a barrel or wood bin for this purpose because it keeps the compost from getting too wet, which can happen if you use plastic containers.

There needs to be a lid on your compost bin. Drill holes in the bottom to allow for drainage. You can set the bin on bricks, which promotes draining. Put green ingredients in your worm composting bin, which includes organic materials from your household. You also need bedding materials, which is straw, shredded newspaper, sawdust, leaves that drop to the ground in the fall and dead plants. Also add a few cups of soil to the bedding materials because this aides the worms? digestive process.

The container should be filled three quarters of the way with bedding. Don?t squash the bedding. Air needs to be able to circulate and there needs to be room for the worms to move.

Now go find yourself some earthworms and put them in the bin. After you?ve added the worms add the green household content, which can be vegetable or fruit peelings, crushed eggshells and grass clippings. You will need to add more bedding to the bin after a few months. At this point you will see that the bin is full of worm castings (excrement.) Add new bedding after you have pushed the already finished compost off to one side. The finished compost is ready to be put in your garden.

The reason composting is advantageous is because household waste is recycled rather than thrown away, cutting down on the garbage that ends up in landfills. The organic material is returned to the earth, nourishing your plants, rather than decomposing in a landfill. Compost is a wonderful fertilizer for both your indoor and outdoor plants.