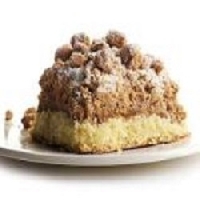 When it comes to crumb cake, the whole is greater than the sum of its parts. But those parts still count, and in more ways than you might think. Use the wrong flour and your cake could end up with all the moistness of cardboard. Or leave out an egg and its structure might collapse.

If you?re wondering what goes into classic crumb cake, here are the main ingredients baking pros reach for to assemble this iconic American dessert.

Flour isn’t a must-have for gooey chocolate cakes, but it’s one ingredient no crumb cake can do without. Flour provides the cake’s structure. It’s so important, in fact, that choosing the right flour almost guarantees your cake bakes up tender but still strong enough to support a hefty layer of crumbs.

Although today’s bakers have at least a dozen flour varieties at their disposal, the choices for crumb cake come down to just two: all-purpose flour or cake flour. All-purpose makes a stronger cake base because it contains more protein and some hard wheat. Cake flour, on the other hand, yields a more delicate cake. It contains less protein than all-purpose flour and consists of soft wheat only.

One thing to note: recipes calling for cake flour in the base almost always require it for the crumb topping as well.

Sugar does more than sweeten both the cake and the crumbs. It’s a tenderizing agent. Because it prevents flour from forming gluten, sugar in the batter helps ensure that, after mixing, you don’t end up with bread dough.

White sugar and brown sugar are both standard choices. White sugar is preferred for the batter, but brown sugar is the clear winner for making crumbs. There are two reasons for this.

The first is that crumbs made only from white sugar tend to be powdery and less cohesive. The second reason is that both types of brown sugar, light and dark, contain molasses, which adds moistness to bind the crumbs. Using either light or brown sugar turns out denser crumbs with a deep, toffee-like flavor.

Either of these fats will tenderize the batter and add moisture. The choice between them comes down to taste. And on that note, bakers are pretty much unanimous: butter reigns supreme.

Think of it this way. Unlike cheesecakes or chocolate cakes, crumb cakes don’t have ultra-rich, strong-flavored ingredients. Without butter in the mix, the other ingredients are flour, sugar, and eggs – all too mild to carry the flavor load.

How essential is butter to crumb cake? Just ask Martha Stewart who uses as much as a quarter pound in a single recipe.

Along with butter, crumb cakes almost always have one other dairy component. Milk, buttermilk, sour cream, and yogurt are common choices. Each one helps to tenderize the mixture. But each imparts a certain flavor and affects the batter differently.

Milk isn’t a bad choice, but its soured counterpart, buttermilk, appears more often in recipes. That’s because the acids contained in buttermilk, which cause its proteins to curdle, result in a thicker product. The thickness makes a sturdier cake, so the crumbs on top don’t sink to the bottom during baking.

Another mainstay ingredient is sour cream, which adds tang for flavor and body for structure. Pastry chefs like Joanne Chang use sour cream to make richer, more dense baked goods.

No sour cream on hand? No problem, says pastry guru Stella Parks. For her, yogurt steals the show. That’s because yogurt, particularly the strained, Greek variety, contains a protein known as casien. This protein boosts the cake’s ability to retain moisture. Casien’s high amount of lactose also adds a depth of flavor to the cake that other dairy products can’t replicate.

Most famous cakes have in their DNA certain flavors you just can’t leave out. For crumb cake, that list boils down to ground cinnamon, vanilla, and powdered sugar.

Tablespoons rather than pinches of ground cinnamon get tossed into the crumb mixture and provide the defining spice flavor that crumb cake is known for.

And if you’re wondering whether vanilla is necessary, try finding a crumb cake recipe that doesn’t have this popular extract in it. That’s about as difficult as finding a recipe without, well, crumbs. Vanilla’s lure comes from its complex flavor and a unique fragrance derived from soaking vanilla beans in alcohol.

Last but not least is white confectioners’ sugar. This powdery substance gets dusted over the crumbs once the cake has finished baking. Taking it off the list is never an option.

The secret is out: use the right ingredients and you’ll make a crumb cake that has everyone asking,”what’s your secret?”