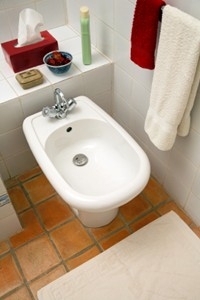 Learn about a plumbing fixture that is standard in most European homes.

In recent movies, the American hick being baffled by a bidet has become a running joke. “Ooh, look! A water fountain!” We don’t usually see bidets in middle-class America, and so many of us may not get the joke. What is a bidet?
What is the Purpose of a Bidet?

Bidet comes from a French word meaning “pony,” probably because you straddle a bidet in order to use it. A bidet is a type of sink that is attached to a wall, but much lower than a regular sink. It is used for cleaning the geintalia and anus after using the toilet. Women can use it to cleanse their vulva after urinating; both sexes can use it to cleanse the anus and perineum after having a bowel movement.

How is the Bidet Used?

A bidet is used after the toilet, and many people believe it is more hygienic than using toilet paper. Some people, however, still wipe with toilet paper before using the bidet. Usually, the bidet is a separate fixture mounted next to the toilet, but you can also get attachments that can be added to an existing toilet. Some bidets have a basin that fills with water; most have a faucet that sprays water upward toward the body.

After using the bidet, the person can either dry off with toilet paper or a small towel hanging next to the bidet. Some bidets are equipped with a warm air dryer, thus eliminating the need to dry off.
~
Where are Bidets Found?

Bidets are very common in Europe, and are becoming more common in the United States. In many areas with an extremely dry climate, or with limited paper resources, such as India, bidets are seen as a way to counteract these problems.

The next time you hear bidet in a movie, you won’t have to ask “What is a bidet?” – good luck explaining it to your movie companion without embarrassment, though.