What is a feral cat? 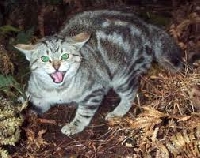 When an animal is referred to as feral, this means that the animal is undomesticated, wild and perhaps savage. An animal, such as a cat, that escapes from domestication can become a wild or feral cat. A cat that was never domesticated in the first place is feral. Feral cats are sometimes referred to as alley cats.

When a cat is abandoned or can?t find his way back home, this leads to an existence where the cat has little interaction with humans. The cat learns to fend for himself in the outdoors. How feral a cat in the wild can become depends on its age and what generation of feral cat it is.

Before you continue reading about the What is a feral cat? there is a special announcement we would like to share with you. Catalogs.com has negotiated special medicare rates for our vibrant community of seniors. If you are over the age of 60, you can head over to our Seniors Health Section which is full of information about medicare. All you need is your zip code and a few minutes of your time to potentially save 100s of dollars on your medicare bills.

When cats have frequent interaction with humans, they are more approachable and friendlier than those who rarely come into contact with humans. A cat that is truly feral does better off living outdoors, and in the environment that he is accustomed to. Bringing a feral cat into your home can create a state of constant fear for the feral cat.

Feral cats usually live in what is a colony that is made up of other feral cats. The group defends its area, which could be an abandoned building, or anywhere that food is available to them. Feral cats stay away from people so you may not realize that they are living in the vicinity because you haven?t seen them out and about.

Feral cats have a shorter lifespan than domesticated cats because they can?t always find food or shelter. A feral female cat can get pregnant as easily as five months, and she can have two or three litters each year. When a cat gets pregnant that young and then reproduces two more times in the same year, this puts a lot of stress on the cat that is trying to survive. Many of the kittens of feral cats do not survive. The male feral cats roam and fight and are often injured as a result. Many become diseased from bite wounds.

The Humane Society points out that the TNR or Trap-Neuter-Return system improves the lives of feral cats, while lowering the feral cat population. The animals are vaccinated against rabies, are neutered and ear tipped on one ear, which is the sign that a cat has been TNR-ed. When a feral cat is ear tipped, this means the top tip of one of his ears is removed while the cat is under anesthesia (for neutering) and this shows the cat is sterile and is part of a colony of feral cats that is being managed.

When a colony of feral cats is managed, and the members of the colony have been TNR-ed there is a caretaker for the colony that provides the cats with shelter, food and water. The caretaker of the cat colony keeps track of the cats’ whereabouts and their health. If one becomes sick, he is removed from the colony. Sometimes a feral cat can be successfully adopted.

When a group of feral cats is not managed this can result in too many cats in a neighborhood, bad odors emanating from the male cats that spray their area, fighting, fleas and sick and dying kittens.

The National Feral Cat Day, Compassion for Cats: Coast to Coast, is October 16, which is sponsored by Alley Cat Allies, the leading cat advocacy organization in the United States whose objective is the protection and humane treatment of all cats. You can become a ?Cat-alyst Society? member helping Ally Cat Allies to keep doing the good work that it is undertaking. Sears Tool