What is a muscle car 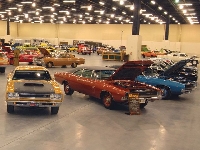 If you hear someone use the term “muscle car,” it’s a near certainty you’re talking to a man over the age of 50 with a dreamy look in eyes, making a rumbling sound while pretending to use a stick shift. The expression came into vogue in the late 1950s and became popular in the early 1960s to describe a certain type of vehicle. So, asks those under 50, what is a muscle car?

One way of defining a muscle car is to think of it as a family car with an engine powerful enough that a teenage boy would not be embarrassed to drive it on a date. In the 1950s, American auto manufacturers began offering 2-door coupe versions of their large 4-door cars with brighter, often two-tone, colors and powerful eight-cylinder V-8 engines instead of the smaller standard six-cylinder V6.

The combination of the light frame, large engine, hot colors and economical prices made these vehicles popular with young men who drove them fast, inspiring many early rock songs. With testosterone behind the wheel and strength under the hood, the vehicles quickly became known as muscle cars.

Before you continue reading about the What is a muscle car there is a special announcement we would like to share with you. Catalogs.com has negotiated special medicare rates for our vibrant community of seniors. If you are over the age of 60, you can head over to our Seniors Health Section which is full of information about medicare. All you need is your zip code and a few minutes of your time to potentially save 100s of dollars on your medicare bills.

Most auto historians point to the 1949 Oldsmobile Rocket 88 as the first muscle car. It came with the large V8 engine from the luxury Olds 98 line in a lighter body that was used for the smaller Olds 76 and Chevy cars that normally were equipped with V6 engines. The end result was a car that won professional stock car races and street drag races and caused all of the major American car manufacturers to quickly offer their own versions of muscle cars.

Each division of General Motors at the time had its own muscle cars. The most popular were the Oldsmobile 442, the Pontiac GTO, the Chevy Chevelle SS and Buick Gran Sport. The Chrysler corporation countered with the Dodge Charger and the Plymouth Road Runner. Ford Motor Company?s muscle cars included the Ford Torino GT and the Mercury Cyclone, while the American Motors Corporation, the smallest of the American car companies, came out with the Machine.

While the larger muscle cars were popular, in 1964 Ford unveiled a smaller sports car that revolutionized the car industry ? the Mustang. Fast, slighter smaller and lower in price, the Mustang quickly became a hot seller and inspired a version of muscle cars known as the pony car, which had a long hood, V8 engine, shorter tail and economical price that made them popular with women and young couples as well. Other pony cars often considered to be muscle cars as well included the American Motors Javelin, Chevy Camaro, Pontiac Firebird, Plymouth Barracuda, Mercury Cougar, and Dodge Challenger.

Gas prices, concern about pollution and fuel economy regulations spelled doom for many of these classic muscle cars. Some of the nameplates like the Challenger survived or were brought back on vehicles that have large engines and sporty features, but none have been able to recapture the power, glamor and excitement of the original 1960s muscle cars. And none have inspired songs like “G.T.O.,” “409” and “Rocket 88.”