What is a Renaissance festival? 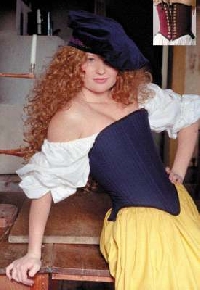 What is a Renaissance festival? A place where you go and have a lot of fun!

What is a Renaissance festival? If you don’t already know it is time to find out. Going to this type event is well-worth your time. If you have children, take them along because they will love it. The festival is a weekend or months’ long event, such as the fest held in Harveyburg, Ohio.

The Renaissance was a point in time of vast cultural change, starting in Italy and moving to the rest of Europe, including England, in large part during the reign of Elizabeth I. It was a period when intellectual wakefulness was aroused after the stagnate Middle Ages.

Christopher Columbus discovered America; the printing press was invented by Gutenberg; Michelangelo and da Vinci were the foremost artists, and it was revealed by Copernicus the earth revolved around the sun.

Before you continue reading about the What is a Renaissance festival? there is a special announcement we would like to share with you. Catalogs.com has negotiated special medicare rates for our vibrant community of seniors. If you are over the age of 60, you can head over to our Seniors Health Section which is full of information about medicare. All you need is your zip code and a few minutes of your time to potentially save 100s of dollars on your medicare bills.

It was also a time of conflicting beliefs. People were learning about math and science, but they also held tight to their convictions that comets predicted death and werewolves existed. This divergence led to religious wars and witch hunts. Europe became far more secular during this time. Music changed and became non-religious.

The Ren fest concept cropped up in earnest after World War II. Americans love the idea and flock to these events in droves. They shop, eat, play games, watch shows and visually take in the fascinating period scenery and beautiful, epoch garments worn by the actors and employees — and many of the festival attendees.

A specific space is transformed to resemble a village in England during the 15th century. Inside the village, shops line the streets, where handcrafts, artworks, books and clothing from the medieval and Renaissance period are sold. Shakespearean plays are given, jugglers juggle and there are dancers and musicians. You can take part in game-playing: Soak-a-Bloke and Drench-a Wench, axe throwing and archery. Watch the jousting competitions and visit the animal displays.

One of the best parts of the experience is the person contact you have with figures who roam the venue, engaging with guests, talking int he brogues specific to the era. You will be delightfully surprised when you heard the accents used by the Ren participants. It’s a combination of Irish intonation, cockney and ab it swashbuckler-like.

Expressions you are likely to hear include “God’s teeth,: which is a curse as is “God’s wounds.” “Fie” is an expression of derision. “Privy” is the bathroom. “Huzzah” is what you shout when you like something.

Upon arrival, you will be welcomed with  “Good morrow” and “Good day” or “Good even” if it is evening. You you leave, listen tot he shouts of “Tarry awhile” or “Fair thee well.”

While at the fest, dance with a pirate or chit chat with lords and ladies. Eat roasted corn, huge roasted turkey legs, fish ‘n chips, stews an soups, all of which were common foods of the era.

Check out the clothing worn by the participants and guests, who are encouraged to dress up. During this time period, there were sumptuary laws that dictated what people were allowed to wear. During Henry VIII’s reign, the colors and type of cloth one could wear were determined by his status. This was a strictly class-based and class-segregated culture. You could tell a person’s station in life by looking at his clothing and their colors. You will be able to do the same when at the event.

Fashion changed forever more after this period because the Renaissance styles paved the way for colorful fabrics, elaborate detailing, costly jewelry and clothing that wasn’t always comfortable or good for one’s health. The clothing involved a lot of padding, which restricted movement and made walking laborious.

This is a very interactive event that both young and old and everyone in between will enjoy. Become a part of the Renaissance experience for an afternoon or evening. It’s a whole lot of fun!