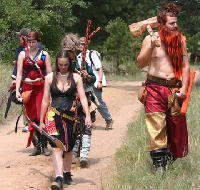 LARPing stands for Live Action Role Playing – what is it?

In this piece about LARPing, we will seek to answer a question that has recently been asked of any one who is not of the millennial generation. LARP is an acronym for Live Action Role Playing. Now, that might sound self-explanatory, but there is quite a bit to it. The live action role playing community is very diverse and there are number of reasons people choose to engage in live action role playing.

As the acronym suggests, LARPing involves a group of people who have gathered together to play different roles for one reason or another, usually as a recreational activity. Two popular types of live action role playing that pre-date the popular use of the acronym LARP are Medieval fairs and Civil War re-enactments.

Both activities involve people dressed in period costumes, complete with accessories and replica weapons or tools, generally interacting with each other as though they were living in that period. While these are two of the more popular and established forms of LARPing, they are just the tip of the iceberg when it comes to this emerging culture.

Before you continue reading about the What is LARPing? there is a special announcement we would like to share with you. Catalogs.com has negotiated special medicare rates for our vibrant community of seniors. If you are over the age of 60, you can head over to our Seniors Health Section which is full of information about medicare. All you need is your zip code and a few minutes of your time to potentially save 100s of dollars on your medicare bills.

LARPing now takes many forms, with live action role players both creating and re-creating worlds. Players of classic games such as Risk and Dungeons and Dragons have taken their game off the table top and into real life by designing their own costumes and fields of play. Some LARPing is done in small, intimate environments, while other live action role games are played at large venues with corporate sponsorship.

Recently, a non-governmental association advocating for the rights of refugees used a live action role playing game to educate participants about the hardships faced by those seeking asylum in the United Kingdom. Participants in this game were subjected to a simulation of being detained and invited to sympathize with those made to face such situations in real life. While it is occasionally used to explore deeper topics such as war and national boundaries, the vast majority of LARPing is quite light hearted and fun.

In the world of LARPing most games can be divided into three types: demonstrative, live steel and salon. Demonstrative games are the most popular as they are the most interactive. These usually involves players or teams of them completing challenges as prescribed by a moderator. Live steel games are like the war re-enactments mentioned at the outset of this article. Live steel LARPing usually involves some form of simulated or low-impact combat.

Some of these games can last for days and involve thousands of people. While live steel is meant to simulate combat, Salon style LARPing usually imagines a more peaceful scenario. One popular Salon LARP gathering is the Wizard?s college, where college students attend a large party dressed as characters from, or simply in the style of, the Harry Potter universe.

Of course, LARPing doesn?t always take place in such structured atmospheres. Some LARPers take their characters and personas to events such as comic-con or the opening day screening of their favorite franchise film such as Star Wars. LARPing is an ever-growing cultural phenomenon that is beginning to catch on with people of all ages. Perhaps this is a reaction to the sedentary nature of contemporary recreational habits. People who are tired of experiencing stories second-hand through movies and video games now have an outlet and a community dedicated to making entertainment interpersonal and interactive.