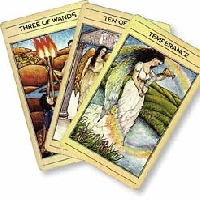 Unlike other religions, New Age isn’t centered on a holy text

Everyone has heard this song at some point in life. While it’s often associated with 60s-culture hippies, the Age of Aquarius is actually an astrological era believed to be on its way or here right now, thus the answer to the question what is new age.

New Age emerged as a lifestyle in the 1960s, but really got its wheels in the 80s. The spiritual base of New Age combines elements of astrology, alternative medicine, nature and music. Everyone has met someone who is “new age-y,” usually into the signs of the Zodiac and a universal truth.

Unlike other religions, New Age doesn’t follow the distinct beliefs outlined in a holy text or by a central organization. Exactly what is new age is based on free-thinking, and the new age practices a person adopts are often tacked on to his or her original religious beliefs.
~

New age spirituality incorporates elements of clairvoyance, particularly in the reading of fortune-telling tarot cards. A traditional tarot deck is made up of two sets of cards, the first (major arcana) depicting 22 pictures, such as the fool, the devil, the sun and death; the second (minor arcana) has 56 cards with kings (or lords), queens (or ladies),  knights and knaves.

New Age sometimes gets a bad reputation for its rejection of religious doctrine. The focus is on the individual and that individual’s attainment of his or her highest potential.

The music of the New Age is often inspirational, positive and used for relaxation and meditation. Think of music played during yoga practice or massage, two cornerstones of New Age spirituality. What is new age music? It is hypnotic, with repetitive beats, and often incorporates guitar, piano, harp and flutes.

Preserving nature is a huge aspect of a New Age lifestyle. Living a simple, sustainable life without infringing on the earth’s natural resources is important to what is new age. More than just “preserving the earth,” this act is often a spiritual symbol.

These are not the only things that define what is new age, however. Remember, this form of spiritual living is free-flowing and every-changing, not to mention different for everyone who partakes in it.