What is the Memento Mori theme 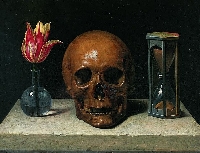 iMemento mori is a Latin phrase which means, loosely, ?remember that you have to die.? This admittedly morbid saying leads to a philosophy which reminds us life is short, you never know when the end will come, and that, in the fleetingness of time, you must make your moments here matter.

The symbolism of memento mori changes slightly from age to age, but much of it is common and timeless throughout. Skulls, skeletons, hourglasses, and depictions of Death?usually as the Grim Reaper with his cloak and scythe, but sometimes as an angel snuffing out a candle?are all common imagery in many different cultures. This imagery was especially prominent in Medieval Christian art, and was intended to keep adherents mindful of their mortality and their deeds on earth (and how these deeds would weigh on their soul once Death came for them).

American Puritans also embraced the philosophy of memento mori. They believed their time here on earth was to be spent looking toward the afterlife, so that they would not sin and mess up their chances of falling on the good side of God’s graces. They didn’t believe in art for art’s sake, thinking it was a frivolous and arrogant waste of time. They did, however, approve of portraits, seeing them instead as historical record keeping. It was in these portraits that they commonly incorporated skulls and other symbols of death as a reminder of their mortality.

Before you continue reading about the What is the Memento Mori theme there is a special announcement we would like to share with you. Catalogs.com has negotiated special medicare rates for our vibrant community of seniors. If you are over the age of 60, you can head over to our Seniors Health Section which is full of information about medicare. All you need is your zip code and a few minutes of your time to potentially save 100s of dollars on your medicare bills.

Another style within (or alongside) the memento mori theme is vanitas, meaning ?vanity.? Vanitas paintings are typically still lifes depicting very specific symbols. Paintings within this genre nearly always contains skulls, but also may have any combination of bubbles (representing the fragility of life), smoke, rotten fruit and faded or wilting flowers (decay), hourglasses or other time pieces, musical instruments, books, seafood, and butterflies.

The memento mori theme can also be seen reflected in Danse Macabre paintings?medieval allegorical depictions of Death (usually dancing or surrounded by dancing skeletons) taking people of all ages and walks of life to their final resting?along with Mexican art associated with the Day of the Dead. The latter is typically more colorful and joyful than much other memento mori artwork, but it still falls solidly within the genre.

It is easy to incorporate the memento mori theme into your own life. Don’t think of it as something only Gothic kids do. A collection of classic memento mori themed paintings and sculpture are beautiful ways to enrich your space.

Many people also collect Victorian death photos, though I will warn you, they are not for the faint of heart. These old images came about in a time when photography was fairly new and very expensive. Often times, the only image a family had of their dearly beloved was one shot post-mortem. As such, they would sometimes prop the deceased up and occasionally even paint eyes on the image after the photo was developed so that they would appear awake and alert (though you can almost always tell). Though, if you are into photography with a healthy dose of mortality attached, some artistically done graveyard and grave stone images might be a bit more company-friendly.

Other less creepy ways of bringing an awareness of mortality into your d?cor is with heavy skull paper weights or book ends (it’s very Hamlet, very tasteful); maybe even skull candles. A grandfather clock with the words tempus fugit (?time flees?) and/or a pair of wings engraved upon it would be a lovely addition to your memento mori collection. Decorating with sugar skulls?those brightly colored and ornately decorated Day of the Dead skulls?and other Dia de los Muertos imagery is both morbid (in a good way!) and festive, and can actually liven up a room in ways you wouldn’t believe. Dancing skeletons, anybody? Sometimes finding the beauty in death can make one feel so much more alive.