What’s the story of the Adirondack chair? 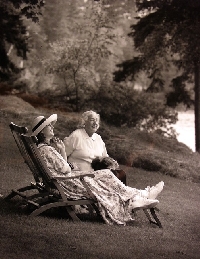 Nothing is more comfortable than an Adirondack chair

The original, called the Westport Plank Chair, was designed by Thomas Lee of Westport, NY in 1903. Lee and his family vacationed at the foot of the Adirondack Mountains in a small town called Westport. The word Adirondack is an Anglicized version of the Mohawk word ?ratirontaks,? which means ?they eat trees,? a disparaging term the Mohawks used when talking about the Algonquian tribes. When food was scarce, the Algonquians ate the bark of trees and the buds.

Before you continue reading about the What’s the story of the Adirondack chair? there is a special announcement we would like to share with you. Catalogs.com has negotiated special medicare rates for our vibrant community of seniors. If you are over the age of 60, you can head over to our Seniors Health Section which is full of information about medicare. All you need is your zip code and a few minutes of your time to potentially save 100s of dollars on your medicare bills.

The Adirondack Mountains, located a few hours north of New York City, unlike the Appalachians and Rockies, are not elongated but domed and circular shaped. This mountain range is sometimes called ?new mountains from old rocks? because it isn?t that old compared to other ranges. Larger than the state of Vermont, this range spans over six million acres in northern New York.

He Wanted Something Comfortable to Sit In

Lee came up with the idea of the Adirondack chair because he wanted comfortable and relaxing seating for his family. The first chair was made from a solid piece of wood, cut into 11 pieces. The back  and seat are slanted  so the seated person could sit at a comfortable angle when the seat was placed on a steep hill. Lee was ahead of his time. He designed the seat ergonomically.

Lee was also ?green? in his design. The seat was made out of one just one plank of locally grown wood.

The chair is simple, consisting of slats of wood forming both the slanted seat portion and the backrest. The arms are wide, and the legs are short. Simple and sturdy.

When Harry C. Bunnell, a carpenter, was shown the product by Lee he decided to make them himself, which Lee approved of. However, Bunnell patented the design. He did this without Lee?s permission. That was the end of that friendship.

Painted dark green or brown, the chairs were originally made of pine. The design changed over the years. Slatted seats and backs became part of the design because the knot-free boards of the hemlock in the original were becoming too rare and could no longer be incorporated into the design.

Contemporary types feature contoured and rounded backs, which was the innovation of Irving Wolpin, who patented this design in 1938. Today, the chairs are made out of teak, cedar, fir and plastic.

The original became popular with the gentleman farmers on the east coast but are now popular everywhere in the country. You may already have this type of seating in your backyard or on your front porch.

People love these seats because they are extremely comfortable. The sitter?s weight is spread evenly through their back and upper legs. There isn?t a lot of pressure on the lower spine or buttocks as there is is when sitting upright.

Teak is the best material for construction because it lasts forever, is resistance to water damage and insects. Cedar and eucalyptus are good choices, too. They aren?t as expensive as teak. Some consumers go the plastic route and that?s okay. They look very nice.

As they say, several slats of wood equaled one legendary chair.