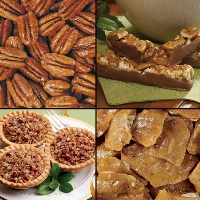 The pecan is a nut native to southern North America and Mexico. It is sweet and meaty and is featured prominently in American Southern cuisine. Quite possibly the most beloved nut in the United States, Americans incorporate it in everything from holiday pies to salads and beyond.

In the Southern regions of the country, there isn?t a Thanksgiving table around that doesn?t feature some sort of pecan pie among the desserts. Standard pecan pies are a flaky shell filled with a sweet, custardy goo made from corn syrup, eggs, and a touch of vanilla with a mass of whole or chopped pecans baked into the top (they tend to float to the surface before baking, and remain there to form a sort of sweet crunchy top crust), but variations abound. A bourbon pecan pie includes this quintessential southern whiskey in the mix, as the name indicates, while adding chocolate (and sometimes raisins) transforms the old standard into a Dixie pie.

Beyond pie, pecans lend themselves well to any number of other desserts calling for nuts. They can be tossed into sweet dessert salads like ambrosia, are darling in chocolate chip cookies, and make a great addition to just about any muffin. Use pecans in your nut filling for baklava or added to fudge for a little added crunch and depth. They also make a great topping for pancakes and ice cream sundaes, and are essential to making pecan pralines and tucking into clouds of divinity.

Like any good nut, pecans lend themselves beautifully to sweet confections, but it might be even more interesting to explore what to do with this common Southern nut for dinner. There is a butteriness to pecans, with very little of the astringent quality you get with walnuts, nor the overt richness of cashews. Pecans, in a word, are versatile.

Many a meat dish has been rolled and crusted with the ever delicious pecan. Think pecan crusted chicken breasts or salmon. Aside from being delicious, this method enables you to have a ?breaded? dinner option with fewer carbs and even gluten free. Roasted pecans ? candied or not ? are also often added to salads to add texture and flavor.

In prepping your holiday meals, consider adding pecans to stuffing or dressing, or milled fine and added to everything from breads to pie crusts.

Pecans can also make great gifts. While not the most expensive nut in the world, they still fetch a pretty price at the grocery store, especially when they?re shelled and cleaned, so even gifting a bag full of the raw, unadulterated version will be much appreciated. If you live in a region where pecans grow, it is worth it to visit your local pecan groves and farmers markets to buy them by the pound, with or without shells. Sometimes they are sold with the shells already cracked but still present. It takes a little work to clean the nuts so that they?re shell-free for eating and cooking, but the lower price point can make all that effort well worth it.

If you want to give a fancier version than just the raw nut, pecans take wonderfully to being roasted and seasoned in a variety of ways. Dredge them in cinnamon and sugar for a sweet snack, or coat them in chocolate or even maple syrup. Spicy food lovers will love a nut roasted with cayenne or Tabasco sauce. Some roasted pecan recipes also call for soy sauce and garlic, or Worcestershire sauce and seasoning salt. The flavor combinations are really endless here, and a variety would fill a gift basket nicely. In a nutshell, pecans as gifts taste good, require no refrigeration for at least a month or so, and travel well with little extra shipping preparation.