When did graphic t-shirts become popular 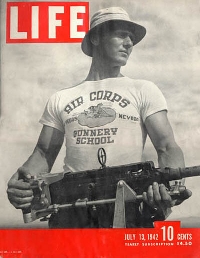 The history of graphic tees and their resurging popularity

Graphic tees are all the rage again, with major retailers stocking neo-retro throwbacks celebrating various pop culture phenoms from yesteryear, along with newly anointed cultural classics. These vibrant silk screened pieces of art include imagery from popular TV shows, movies, classic rock bands, and popular corporate logos from cleaning products to American made muscle cars. The garment?s look is often distressed, creating the illusion that this brand new t-shirt you just bought was hanging in a closet somewhere since 1970, minus the stench of dust and mothballs.

Graphic t-shirts first became popular in the 1960s when new inks were invented that simplified the printing process. One of the first printed t-shirts appeared as early as 1942, when an Air Corps Gunnery School tee appeared on the cover of Life Magazine. T-shirts themselves appear to have been invented in the early 19th century and were named as such because their shape resembled the letter T. The t-shirt became standard issue for the military as an undergarment and was marketed as such for decades afterward.

But, it wasn?t until the likes of Marlon Brando and James Dean wore those iconic plain white t-shirts in the movies, A Streetcar Named Desire and Rebel Without a Cause, that the t-shirt became a powerful fashion statement. At the time, it was considered scandalous that undergarments were being worn visibly as clothes, which only fueled each actor?s bad boy image and propelled them into stardom.

Before you continue reading about the When did graphic t-shirts become popular there is a special announcement we would like to share with you. Catalogs.com has negotiated special medicare rates for our vibrant community of seniors. If you are over the age of 60, you can head over to our Seniors Health Section which is full of information about medicare. All you need is your zip code and a few minutes of your time to potentially save 100s of dollars on your medicare bills.

Graphic t-shirts gained in popularity through the hippy movement and into the 1970s. One of the most iconic graphic tees of all, is the yellow smiley face, which was arguably the first emoticon in history. However, the prize for most famous graphic tee probably goes to Andy Warhol?s iconic Marilyn Monroe tee, which is a cult classic that?s still reproduced to this day.

These early iconic tees made statements about politics, sexual liberation and just about anything worthy of a revolution. They became so popular that custom t-shirt booths popped up in shopping malls, with big binders of designs to peruse and buy. Designs were affixed to paper in reverse, then heat transferred onto a t-shirt of your choosing, right before your very eyes. Heat transfer designs were printed on vinyl, which would wrinkle and crack with each successive washing, while graphic tees use a silk screen process that?s more durable but tends to fade over time.

The art of silk screening, or serigraphy, dates back to ancient China. Typically, silk screened tees use simple vector art and only a handful of colors, which are placed onto the tee in layers, one color at a time. The process is called silk screening because designs are transferred onto a piece of silk using a photo exposure method which allows ink to pass through the silk in some areas, while blocking its transfer in others. The silk design is then stretched onto a wooden frame, which in turn, is placed atop a t-shirt. Each individual color of ink is then dabbed onto the silk and manually transferred onto the t-shirt by hand using a squeegee. When the ink dries, the next layer of color is added. It?s a slow and time consuming process and many high school shop classes teach the process to young students.

Modern silk screening still works in much the same fashion, though airbrushing has become more widespread and offers complex, photo-realistic results. For a time, graphic t-shirts dwindled in popularity, but continued to be widely used by bands and pop stars as lucrative concert merchandise. Their relative low production cost compared to the exorbitant prices charged make them big money makers at concerts the world over. Fans, in turn, become live advertisements as they walk down the street showing off their favorite band.

Ever since graphic t-shirts became popular, they?ve been a statement of individuality and self-expression, and their recent resurgence signals a new renaissance for this iconic wearable art  As is often the case with fashion, what?s old has become new again.

The new graphic tee now includes all sorts of popular imagery, including animals, landscapes and reproductions of famous artistic works. There?s never been a better time to become a new fan of the classic graphic t-shirt.