When popcorn became a movie snack 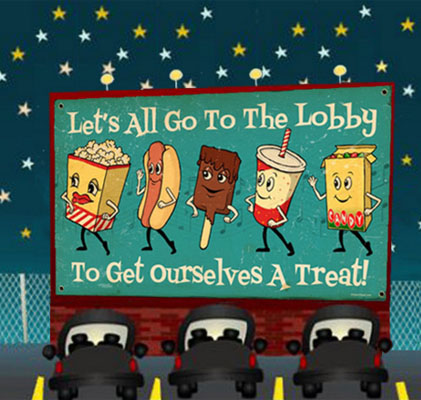 Cinema goers may wonder when popcorn became a movie snack

Let?s be honest, many of us go to the movies just to eat that irresistible buttery popcorn. Concessions and the silver screen go hand-in-hand ? movies are actually more entertaining when watched between handfuls of freshly popped goodness. It?s a fact.

It may surprise you to learn that this savory delight wasn?t always a theatre staple. According to the Smithsonian, it actually used to be banned from the premises. So what happened?
When popcorn became a movie snack, going to the theatre became about having a good time.

By the late 19th century, popcorn had already burst into American pantries via New England whalers who brought it back from Chile. At the time, before TV and online streaming, the act of popping hot corn was a popular entertainment.

Before you continue reading about the When popcorn became a movie snack there is a special announcement we would like to share with you. Catalogs.com has negotiated special medicare rates for our vibrant community of seniors. If you are over the age of 60, you can head over to our Seniors Health Section which is full of information about medicare. All you need is your zip code and a few minutes of your time to potentially save 100s of dollars on your medicare bills.

As fancy movie theatres and palaces cropped up around the turn of the 20th century, their intention was to replicate the elegance of stage theatres. They courted upscale clientele with plush carpeting, chandeliers and ornate furnishings, as well as a check-your-popcorn-at-the-door policy.

Attendance shifted around the 1930s as the addition of sounded appealed to a much wider audience. Theatre owners took note of rising profits and began exploring additional streams of revenue. Sound also conveniently masked the sound of crunching and finger licking.

One good thing to come from The Great Depression is the permanent home at the concession stand this king of snacks found for itself. This is truly when popcorn became a movie snack, though it seems inevitable now.

Let?s all go to the movies

As jobs and businesses vanished, the unemployed sought ought cheap distractions. The more entertaining the better. People all over filled movie houses and they arrived hungry. A bag of hot popcorn, at around 5 to 10 cents, fell within their means and it didn?t disappoint. As it happens, this substantial snack also offered a much-needed nutritional boost.

It was a win-win-win relationship from the start. The snack had finally found a high-volume market. Making and selling it required little investment from theatre owners in exchange for consistent profits. And increasingly poor and hungry people enjoyed entertainment and a cheap, healthy food.

The earliest movie houses weren?t built to accommodate the poppers of the time. Instead of renovating, owners rented their lobbies and permitted vendors to sell popcorn from their carts outside of theatres, forever more linking that distinctive aroma to the thrill of movie time.

When times get tougher

Look closely at when popcorn became a movie snack and you?ll see how much it owes to the circumstances of the times. The Great Depression served as its ticket in, but it was World War II that sealed its place. Food rations and sugar shortages took a toll on the availability of other snacks like soda and candies.

Aggressive, catchy advertisements before and during the feature presentation, like the popular drive-in tune ?Let?s all go to the lobby?, worked magic over audiences. By 1945, more than half of the popcorn-eating in this country was done in movie theatres.

Theatre attendance declined around the 1960s as TVs brought entertainment to comfort of living rooms everywhere. The popcorn industry adapted, making it easy to make the treat at home, first with simple air-popping machines, then microwaves or ordered in a wonderful variety of flavors from a gourmet popcorn store.

The link between movie nights – whether at home or in a theatre – and that consistently tempting taste of gourmet popcorn was forged during times of strife. Popcorn saved hundreds of movie theatres in the 1930s. Most of those that refused to sell what people craved went under.

Though the mark-up at theatres is much higher today, many people can’t help but visit the concession stand before finding their seats. It’s a treat! Today, concessions make up 46 percent of movie theatres? profits. Imagine how much higher those ticket prices would be without our favorite tasty snack!