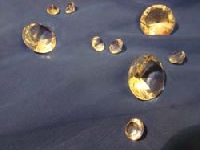 Chocolate diamonds ? the term sounds yummy, doesn?t it? This is a proprietary term from the LeVian Company that refers to their line of brown diamonds, which are gaining in popularity every day.

Let?s take a closer look at these deliciously beautiful stones.

Where they come from

Diamonds come from all over the world in a variety of shapes, sizes and colors. Brown diamonds are found primarily in Australia, Angola, Borneo, Brazil and the Congo. LeVian sources their beauties from the Argyle Diamond Mine in Australia. Rio Tinto opened the mine in 1983 and it produces a phenomenal amount of colored diamonds every year.

It takes extremely high pressures and temperatures to cause carbon atoms to crystalize into diamonds. While clear stones are the most common and have little to no impurities, colored stones, on the other hand, require impurities for their color. Every colored diamond has mini voids in the crystal and the impurity in the void causes the color. Gemologists do not know which impurity causes a diamond to appear brown, although there are many theories.

Brown diamonds have a variety of names to make them more appealing to the public. For example, you?ll also find them marketed as champagne and cognac colored stones. But, if you prefer the Australian stone by LeVian, only look for the ?chocolate diamond? name, since is a registration owned by LeVian.

History of the chocolate diamond

According to company history, the term chocolate was inspired by Eddie LeVian?s desire for one of his favorite treats ? organic artisan dark chocolate. He connected the passion people feel for great chocolate with the fancy diamonds and the name was born.

In 2000, LeVian branded their colored diamonds and introduced them to the public at large. The idea behind the trademark registration was to give buyers peace of mind. LeVian wants people to know that they use only the highest quality brown diamonds and are specifically chosen with color, cut and clarity in mind.

Brown diamonds tend to be less expensive than their colorless counterparts, which is one reason why they are so popular for fashion jewelry. However, LeVian?s concept was to differentiate their high color and good quality brown diamonds from those that are barely above industrial grade. It?s this commitment to quality that earned LeVian the reputation of being the fashion house of brown diamonds, just as an original Alexander McQueen is worth more than knock-off priced at a fraction of the cost for an authentic original.

Be prepared to pay for intrinsic value and quality, as with any other diamond. Over time, your investment in quality should fare better than the expense of a lower quality stone.

Future of the chocolate diamond

The Argyle Diamond Mine is scheduled to close within the next few years. Some experts believe the stones will be exhausted at this location as soon as 2018, while others believe the mine should remain productive until 2020.

Regardless, after the closure of the Argyle mind, there will be fewer fancy diamonds on the market, including not only the chocolate diamond but also 95 percent of the world?s pink diamond supply. LeVian will either have to source their diamonds from another location or discontinue the line ? which will make existing pieces more valuable.

While the mines in Angola, Borneo, Brazil and the Congo have some brown diamonds, the volume is relatively low and the quality may not be high enough to match the current chocolate diamond. Everything said, the original chocolate diamond from LeVian comes from the Rio Tinto mine in Australia. If there is another version to come, it may be just as beautiful ? but there?s nothing quite like the original sweetness of the chocolate diamond.