Why do men wear ties? 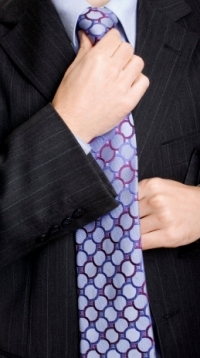 Check out these quirky and logical answers.

Many people have given many answers to the question ‘Why do men wear ties?’. None are really very succinct; however, there may be some truth found in some of the answers.

Some have said that a tie is really a phallic symbol – with the point directing the viewer’s eye downward to the man’s genital area. In other words, the guy is subtly showing off! Say it isn’t so! A guy boasting about his manly parts? Now, is that really possible? You’ll have to be the judge!

Before you continue reading about the Why do men wear ties? there is a special announcement we would like to share with you. Catalogs.com has negotiated special medicare rates for our vibrant community of seniors. If you are over the age of 60, you can head over to our Seniors Health Section which is full of information about medicare. All you need is your zip code and a few minutes of your time to potentially save 100s of dollars on your medicare bills.

Of course, assuming that there is some truth in the above, what does that say about those who prefer to wear bow ties? Look anywhere but down? That might not be too rational. Or, can this explain why the really, really narrow neckties went out of fashion? It’s something to think about. No doubt it would be an interesting discussion group topic.

Others have suggested the wearing of ties is simply a means of covering the mismatched buttons on an otherwise good shirt. Not a bad idea. Nor is the idea that men wear ties to cover spots on their shirts. Have you ever noticed that men usually toss their tie over their shoulder when eating? That’s done not only to prevent the tie from getting in the way of eating, but it’s also a good cover-up when they dribble their food on their shirt when trying to reach their mouth. Obviously, those espousing this theory do not have high regard for men’s table manners.

Why Do Men Wear Ties? Because of a War

As with most things, the answer can be found in history. Neckties date back hundreds of years, coming into existence as the direct result of a war. In 1660, in celebration of its hard-fought victory over the Ottoman Empire, a crack regiment from Croatia (then part of the Austro-Hungarian Empire) visited Paris. The soldiers were presented as heroes to Louis XIV, a monarch well known for his tendency toward personal adornment. The officers of this regiment were wearing brightly colored handkerchiefs fashioned of silk around their necks. These neck cloths – which probably descended from the Roman fascalia worn by orators to warm the vocal chords – struck the fancy of the king, and he soon made them an insignia of royalty as he created a regiment of Royal Cravattes. Vanity reigns supreme! The word “cravat,” is derived from the word “Croat.”
~
A Growing Trend

It wasn’t long before this new style crossed the channel to England. Soon, no gentleman would have considered himself well-dressed without sporting some sort of cloth around his neck – the more decorative, the better. At times, cravats were worn so high that a man could not move his head without turning his whole body. There were even reports of cravats worn so thick that they stopped sword thrusts. The various styles knew no bounds, as cravats of tasseled strings, plaid scarves, tufts and bows of ribbon, lace and embroidered linen all had their staunch adherents.

How can we account for the continued popularity of neckties? For years, fashion historians and sociologists predicted their demise – the one element of a man’s attire with no obvious function. Perhaps they are merely part of an inherited tradition. As long as world and business leaders continue to wear ties, the young executives will follow suit and ties will remain a key to the boardroom.

It is interesting to note that while Internet millionaires in T-shirts and faded jeans set the style standard for men during the late 1990s, dress pants and dress shirts, jackets, suits and ties have made a comeback. Some companies are reversing the casual dress code to in vogue during the dot-com era.

Also contributing to the continued popularity of the necktie is the recent trend toward preppy styles that has helped dress up men’s casual wear and boost demand for the dressy-casual styles of many companies. Additionally, we went from a very small percentage of men who really cared about fashion to a large number of fashion-conscious males.

And then there’s the trend that many guys – faced with a lackluster jobs market – are taking ‘dress for success’ to heart with more tailored, dressy attire and with classic styles that require a tie.

There is no answer to the question of why some men continue to wear ugly ties with obnoxious sayings. Obviously the fashion-conscious trend has not – nor ever will – reach them!